The Best CrossFit Gym in Cardiff

EDIT: Feb 2011 Since writing this post, a dedicated CrossFit gym has opened in Cardiff: CrossFit Cardiff funnily enough! I recommend you go there (near Boulders Climbing Wall) and get proper CrossFit coaching from my mate Jon Hares, he’s a top coach and top fella to boot. Failing that, there’s also Dragon CrossFit, who operate out of Train Station 2, closer to the city centre.

Looking for a Crossfit friendly gym can be a frustrating task. When I was looking in London, I put together a long post on all the Crossfit capable gyms near Farringdon, London. It’s about time I did the same for Newport and Cardiff.

When I started working in Newport it was obviously one of my first jobs. Clearly it would be great to find a Crossfit friendly gym on my doorstep, but that was too much to hope for. I also didn’t expect to find somewhere in Newport so expanded my search to Cardiff from the off. Moving to a new town I did what everyone does now when looking for local information: I searched in Google and spent several days phoning and visiting gyms.

It’s probably worth listing here what makes a gym suitable for doing Crossfit? At least in my mind anyway, in rough order of my importance (obviously more of each is better), this is my list:

1. An Olympic weight lifting bar. Eleiko would be best.
2. A modest selection of bumper plates for said bar. By bumper plates, I mean rubber weight plates that don’t break the floor or themselves when dropped from over head.
3. A suitable floor to drop the bumper plates on, with enough surrounding space for safety. Basically, can I do clean and jerks, snatches, thrusters, push presses, shoulder presses etc?
4. A squat rack for back squats and front squats.
5. Somewhere to do deadlifts.
6. A rower, Concept 2 is preferred.
7. Somewhere to run, outside would be best, but treadmills are likely to be the norm obviously.
8. A pull up bar, stable enough and with enough room for kipping.
9. A selection of rubber dumbbells.
10. Boxes to jump on.
11. Medicine balls to throw at walls.
12. Walls to throw medicine balls at! Though I do hate wall balls.
13. None bouncing balls for ball slams.
14. A set of gym rings… yeah fat chance of that.

It’s worth mentioning the runner up first, which was Train Station 2 in Cardiff. TS2 has a lot of room and uniquely a 90m running circuit round the outside. It’s also allegedly the home of Crossfit Wales, which is a slightly ambitious title, especially as when I went to see the place, they weren’t doing any Crossfit classes. That’s actually changed now, and I know there is a Crossfit class being run on a Saturday morning, by a certified Crossfit instructor called Dav. I’ve got his number if you’re interested.

However I decided against Train Station 2 primarily because of the oly bar and plates. Whilst possibly adequate, there wasn’t a proper lifting platform and I was concerned about dumping the bar on the 1st floor. Having seen many places by now, I was thinking I’d been spoilt by Crossfit Manchester’s dedicated lifting platforms.

That was when I found what is undoubtedly the best gym in Cardiff to do Crossfit. I’ve mentioned it before, it’s Aspire Fitness on Sanatorium road. I should put the record straight right now: when I mentioned them before I called them a “Globo Gym”. Now when I said that, I meant that they appeared (at least to my inexperienced eye) like most other “normal” gyms out there, and not like a sparse Crossfit gym. I didn’t mean to allude to them being part of a large chain, they are not and the benefit from the very friendly small business atmosphere they have. What really sold me on Aspire however, was the brand new Eleiko oly bar they had, and the very nice personalised lifting platform in the corner. 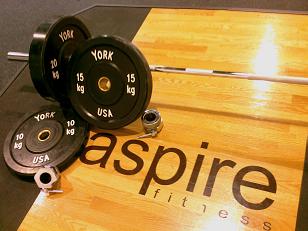 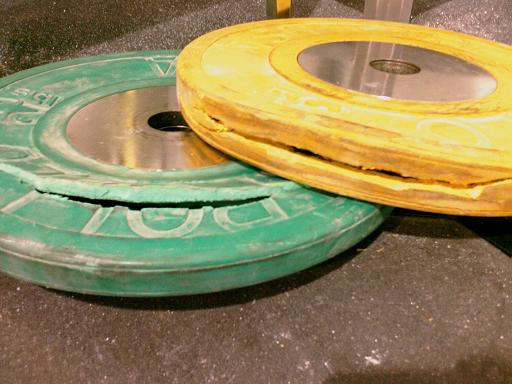 But they assured me that they would maintain a decent set, and true to their word, they now have a full set of good quality York Fitness bumpers: 5, 10, 15, 20 and 25kg:

Off my shopping list of requirements, Aspire Fitness cater for very nearly everything else as well as the Olympic bar and bumper plates. They have 4 power cages (I think they’re called) for doing squats in, plus a free standing squat rack. They have plenty of weight and space for dead lifts; 2 Concept II rowing machines; I think 8 treadmills; a selection of variable sized boxes to jump on; room for floor work like press-ups (push ups for the Americans), skipping etc.

Each power rack also doubles as a pull up station, by hanging on the horizontal bars at the top. They are even cunningly designed for just such a use. The designers were so nice, they thought they’d be really helpful: the knurled the bar! I strongly suspect that most people (like I hadn’t) have never tried kipping pull ups on a knurled bar… take my advice… don’t! It will rip your hand to shreds. Fortunately the second bar at the top, whilst painted with a rough finish, is not knurled and is usable, you just have to move the bar out of the way and put it on the floor.

So pretty much the only thing Aspire don’t have, is a set of gym rings and a selection of medicine balls. They also suffer the ailment that most normal gyms suffer, it’s called mirror-itis. There are far too many mirrors for my liking, but to be fair, they are by no means everywhere and I strongly suspect that just 1 mirror, would be too many for my liking!

However there is really only 1 place to do wall balls, and even then I need to move the bin, fire extinguisher, and ensure no one is using the power rack next to it. There’s no ball slam facilities either.  I tried once with one of the heavy basket balls they had, nearly knocked myself out!

Oh yes, they also have an assortment of mysterious devices, contraptions and machines which I stay well clear of, but again, not too many as most gyms have.  And as you can see, if you’re prepared to go a bit later, it’s pretty quiet too.  This photo was taken about 20:45 :

The point I’m making is that nothing but a dedicated Crossfit gym is going to be 100% perfect for Crossfit, and even then, not always. Aspire is not perfect, but I’d put them 90% there on my “Crossfitoscale” and that last 10% can usually be subbed, as most Crossfit elements can be, e.g. sub wall balls for empty bar thrusters.

So if you’re looking to do Crossfit in Cardiff, or even Newport which isn’t that far away, Aspire Fitness is where I’d recommend you go. They are reasonably priced, but you should measure these things on value, not just price. If you are going to go, say hi if you see me, I’m most often there on a Tuesday and Wednesday around 5-6pm. Or let Pete (one of the owners) know you found them through this blog. Oh and one more thing, if you do see me, don’t hog my oly bar! 😉