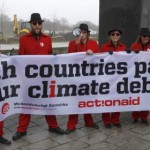 In Copenhagen at the end of 2009, “rich nations” were slated for back tracking on helping tackle climate change. Now don’t get me wrong, I think climate change is a very important issue, but what got me annoyed, was who defines which nations are “rich”? I live in the UK and it certainly doesn’t feel like us right now.

Classically nations are ranked by Gross Domestic Product (GDP), which I think it silly, as the government doesn’t get the GDP in it’s pocket, it only gets what it taxes, which is much MUCH less than GDP. Similarly national debt is often quoted as a percentage of GDP, which I also think is silly, it should be quoted as percentage of government income too. Let’s look at some numbers (I like numbers!):

This table shows countries ranked by absolute national debt. Which puts the US at #1 and the UK at #2 with $14Tn and $9Tn respectively. Now the UK national debt is listed as 398% of GDP, which is pretty bad, but when you compare it to total UK gov’t receipts of around £550Bn (roughly $900Bn) then we owe 10x our annual income! That’s pretty damn shocking. In fact, if I went to my bank and asked for a loan, and they discovered my over draft was 10x my net income (salary less tax) they’d laugh so hard they’d bust a gut and probably try to call in the loans.

Let’s quickly look at gov’t spending then. Here are the charts from last year’s budget at the end of 13 years of a Labour government: 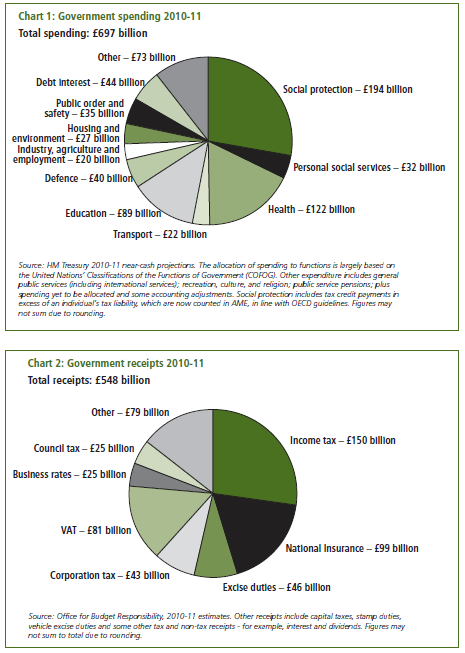 Secondly, interest payments on national debt are £44Bn, which is 8% of income. Or put this another way, that’s enough to build 49 Wembly stadiums per year! How would you have liked a wembly sized stadium in your local town?

Thirdly, Income Tax (£150Bn) + Corporation Tax (£43Bn) = £193Bn, but spending on Social Protection = £194bn. So let me get this straight, every penny of personal income tax added to every penny of company tax, still isn’t enough to pay our benefits bill (and that doesn’t even include the much vaunted NHS). No wonder half of Africa is prepared to risk life and limb to make it into this country.

I don’t know about you but I find all these big numbers are hard to equate to, so let’s make a comparison which can all understand. The average (median) salary in the UK is £24,700 which according to this calculator, means a take home pay of £1,596 per month.

So let’s pretend the UK government was bringing in each month what the average person does and see how the debt numbers change:

How would you feel if your personal finances looked like that, a take home pay of £1,596 but an overdraft of nearly £200k that’s getting worse by about £5k per year?!?

I don’t know about you, but I wouldn’t say we were rich, I’d say we were completely stuffed! This country will be broke within my lifetime. Enjoy your NHS and your pensions whilst you can, they won’t be around for long.