I would never say I’m the most cultured person in the world, but occasionally it’s nice to soak up the cultural offerings that living near a city like Manchester has to offer. I’d say once a year I thing about doing something for cultures sake alone. As this whole week is Manchester Jazz Festival I went with the nipper and some friends to St Ann’s Square to watch a free performance of a Spanish Jazz Band called 12twelve (the fact that there were only 4 of them perhaps should have been my first warning of things to come). 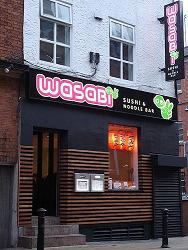 It was a dicey affair as the typical British July summer had heavy rain showers all morning, but we were lucky that it dried up just in time for our arrival in Manc. After a nice cheap lunch at the relatively new Wasabi Sushi Bar in China Town (like Yo Sushi, but half the price):

With the Jazz performance starting at 3:30pm we arrived promptly at 3:15 full of sashimi, just in time to get 5 seats together. The band were on stage milling about and setting up and I happily awaited my annual cultural injection.

Sadly we had to wait a looooong time. The band came and went and came and stomped about and tried a few instruments and went and came and tinkered a bit more and cellotaped stuff down and fiddled with settings and generally wasted a whole heap of time, for about an hour while a few hundred people sat in typical stoically English fashion, not complaining about their tardy start. Well maybe except for yours truly who was getting rather bored myself, not least of which with how to keep a 7 year old entertained out in the cold, with the threat of rain and no toy related props.

As my mate Mark said, to expect a Spanish Jazz band to care what time they should be starting, was possibly being rather over optimistic.

To say the crowd was pleased when they finally started was an understatement, although we first had to endure a rather silly and overly long opening speech that was given in Spanish and then translated into English by one of the Manchester Festival organisers. I was beginning to wonder if the price of this “free performance” was one that was too steep to pay? As I said, to much relief the crowd (well me) was finally happy when the band started playing.

In hindsight I should have listened to the downloadable audio snippets before going because, to put it bluntly, they were rubbish! The “combining features of contemporary music, psychedelia and electronic music” was it seemed an excellent excuse to take all that is good about Jazz and rip the heart out of it. In fact I would say that the only reason they called themselves a Jazz band at all was because one of them played the Saxophone.

Now I’m quite prepared to accept that I know nothing about Jazz and I’m talking rubbish, however my opinion was backed up by at least 10% of the audience, who all rose and left immediately after the first song. (It of course wouldn’t be very English to walk out mid performance, oh no, that would be a rude step too far.)

I should I suppose point out that the 10% that left were the oldest segment of the crowd, which only goes to prove that I’m an old fuddy duddy at heart, which is fine. Though I should also point out that that oldest segment probably had more experience of being “influenced by the ‘free jazz’ of the late 1960s and early 1970s” that 12twelve were meant to have taken as inspiration, than the band clearly had.

Fortunately there were 2 ancillary forms of spontaneous entertainment the first in form of a clearly insane dancing chap (I’ve seen this fella and his troupe of dancers before once in Exchange Square, they’re actually pretty good). My kid wanted to go dance with him (she didn’t like the band either!) but was too nervous until she found another girl who was also too nervous to go on her own. Strength in numbers won the day and the dancing bloke seemed pleased as punch with his 2 new acolytes. 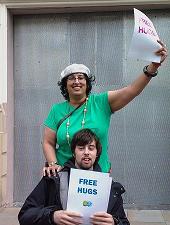 The second ancillary entertainment was a pair of (probably student) hippies from the Free Hugs movement (website is currently hacked, actually worse than my website was hacked a few weeks ago) so you can see an old cache of the site here: Free Hugs Archive.

I actually like the free hugs movement, it’s one of those warm fluffy aspects of the human community that the world is generally sorely missing. So for fun, me and the nipper joined in for 10 minutes and became honourary Free Hugs members, which brought a smile to our and others faces. Good harmless fun.

Sadly the tardy Spanish meant that we were later than planed at our backup cultural offering of some Chinese festival thingy that was going on in Exchange Square. We arrived just as a major spectacle was ending, and all that was left was a group of martial artists. Whilst impressive, they were not enough to keep us there as the first drops of rain of the late afternoon started to fall.

So there you have it, abortive culture maybe, but I’ll take the afternoon in preference to sitting at home watching Road Wars on tele.