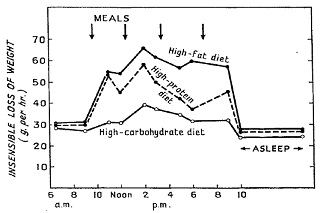 Diet programs on TV depress me. They depress me because 90% of them continue to trot out the same old advice, which can be summed up as:

That statement was disproved 55 years ago

Oh I wish it were so. I wish that you could reduce the complex processes in the stomach to such a basic and simple equation, fit for the headline science that rules most people’s lives these days. I watch these programs and hear so called food experts saying: “A Calorie, is a calorie, is a calorie. Eat less, exercise more, and you’ll lose weight.” And indeed, at least the second part of that sentence is sometimes true, for some people, some of the time. But it belies the reality of human physiology and sets people up to fail, principally due to the hunger they will feel on such a calorie restrictive diet will mean they won’t stay on it for long, but also because a calorie, is not a calorie, is not a calorie! Our body doesn’t treat all calories the same, because proteins, carbohydrates and fats are fundamentally different and our bodies react to them differently.

Before I show that that statement was disproved 55 years ago, this is what Wikipedia says about 1 of the 3 phases of digestion:

Gastric phase – This phase takes 3 to 4 hours. It is stimulated by distension of the stomach, presence of food in stomach and decrease in pH. Distention activates long and myenteric reflexes. This activates the release of acetylcholine which stimulates the release of more gastric juices. As protein enters the stomach, it binds to hydrogen ions, which raises the pH of the stomach. Inhibition of gastrin and gastric acid secretion is lifted. This triggers G cells to release gastrin, which in turn stimulates parietal cells to secrete gastric acid. Gastric acid is about 0.5% hydrochloric acid (HCl), which lowers the pH to the desired pH of 1-3. Acid release is also triggered by acetylcholine and histamine.

Calories are calculated by burning food and see how much it heats up a beaker of water.

That process is really just the basic mechanics of digestion and doesn’t address the work of the enzymes that break down the food, or the absorption process, or the hormonal response the body has to the receiving the food’s constituent nutrients. Do you know how scientists reduce all that to a simple calorific value? Calories are calculated by burning food and see how much it heats up a beaker of water. How that has any relation to what really happens in our body is beyond me. Take a look at this video of the process:

The problem is, your stomach doesn’t burn food!

Because fat releases more energy when burned than carbohydrates, it heats water up more and so has more calories. Hence if you believe the equation at the start, fat must be worse for you than carbs. This is the basis for the “fat bad, carbs good” argument that has dominated modern dietary advice for decades. The problem is, your stomach doesn’t burn food! And therein lies the nub of the problem. Do we know for sure that our bodies react differently to fat calories, than carb calories, or protein calories? Oh yes, we’ve known this since 1956 (and before really).

You see in 1956 there was an experiment done, published on 28th July 1956 in The Lancet (the world’s leading general medical journal) by Kekwick and Pawan, in London, to test exactly this. It was called: CALORIE INTAKE IN RELATION TO BODY-WEIGHT CHANGES IN THE OBESE. They did 2 experiments, each over about a month, under hospital conditions.

For both experiments, water intake and salt intake was controlled for to keep total intake at the same level for each patient on each diet (3 litres of water and 10g of sodium chloride per day if you’re interested), further water retention / loss was measured and accounted for to get a real view of actual (non-water) weight loss. They also accounted for water retention due to the menstrual cycles of the female patients (which they found was significant)! 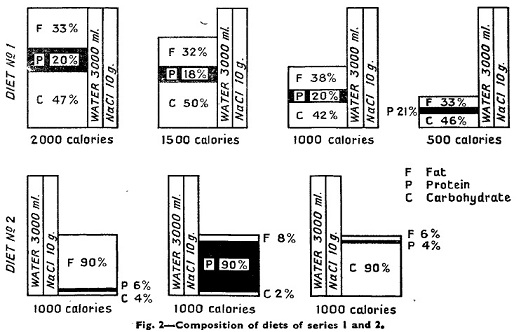 To prove that the proportion of Protein, Carbs and Fat is unimportant whilst calories are maintained at a set level, a second experiment was done. This time 14 obese patients were all placed in turn on 3 diets (again after a period of weight stabilisation), each diet was just 1,000 calories but the proportions were changed to rotate through 90% fat, 90% protein and 90% carbohydrates (and a control diet of normal proportions). This should prove that a calorie, is a calorie, is a calorie, irrespective of source, yes? Clearly the result should be that all would lose weight, and do so at the same rate, irrespective of macro nutrient make-up. Wrong! Quoting directly from The Lancet, the authors said:

“So different were the rates of weight-loss on these isocaloric diets that the composition of the diet appeared to outweigh in importance the intake of calories.” 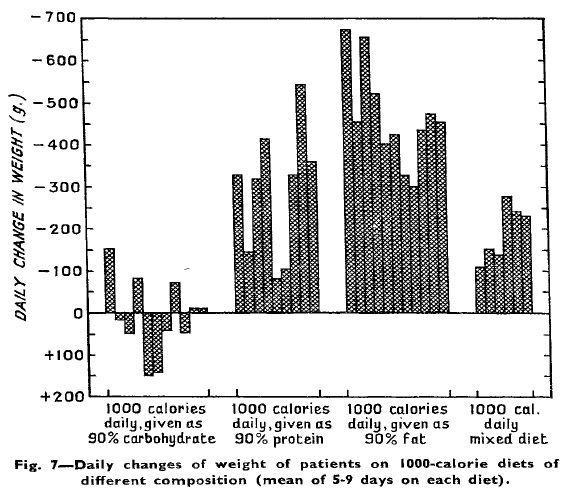 Not only do we see that each of the four 1,000 calorie diets results in a different weightloss rate, what’s most astonishing is that over half the patients on the 90% carbohydrate diet actually put weight on. That’s an OMG moment ever I’ve seen one! If you’re on a high carb, low fat, low protein diet, your calorie restriction skills had better be awesome if you want to lose weight, certainly this shows you need to virtually starving yourself to death in order to lose weight.

Kekwick and Pawan then came up with a 3rd experiment to confirm their findings, but this time rather than reducing calories form a normal diet, they increased them. After first finding a baseline stable weight on a 2,000 calories diet (all either gained or increased weight on a 2,000 diet over 7 days), they then increased the calories by 30% to 2,600 calories per day, but changed the proportion to high fat, high protein levels. Again in their words:

“It was demonstrated that these patients on the whole could maintain or gain weight on 2000 calories but except in one instance, lost weight consistently on a 2600 daily calorie intake.”

Let’s just be clear what’s being said here. Increasing calories by 30% triggered weight loss, just by changing the proportions of the macro-nutrients. That’s huge! That’s not to say that caloric restriction doesn’t work, it obviously does. The issue is that caloric restriction requires considerable willpower to maintain and for most people is not a long term diet solution. Remember that if you use diet as a temporary weightloss tool, and then return to your usual diet, your weight will also return to it’s usual pre-diet levels. To illustrate this point, I’ll again quote directly from the Kekwick and Pawan study (gotta love the 1950’s terminology here):

“In such a study the difficulties are formidable. The first and main hazard was that many of these patients had inadequate personalities. At worst they would cheat and lie, obtaining food from visitors, from trolleys touring the wards, and from neighbouring patients. (Some required almost complete isolation.)”

The point of this post was to prove that a carbohydrate calorie is not the same as a protein calorie, which is not the same as a fat calorie, and the Kekwick & Pawan study conclusively proves that. Yet here we are in in the present day, and still the mainstream dietary advice is to cut calories to lose weight. It’s shocking that 55 years on, and we still haven’t taken on board fundamental research like this. Slowly I see evidence that the world is changing though, so I remain hopeful. I still maintain that history will record the 20th century as the dark ages of dietary advice, responsible for millions, if not billions, of premature deaths.