Build up for the Yorkshire Masters

I may have mentioned, I’ve entered the Yorkshire Masters as a guest lifter in August. This is my first potential qualifying competition of the year as I have to re-qualify for the BWLA British Masters again for next year. As before, in the 85kg weight category for Men aged 35-39, I have to lift a qualifying total of 175kg (best Snatch + best Clean & Jerk). E.g. 75kg Snatch + 100kg C&J.

The competition is now 5 weeks away and I’m starting my build-up. As I have a month, I’m trying each week to increment the weights I lift by 2.5kg and get 5 good lifts at that weight, before moving up. So yesterday I was at Crossfit Manchester (the Mon-Wed 8pm Olympic weightlifting class) and working on Snatches at 67.5kg (you may recall my PB is 77kg, which I got at the 2009 BLWA British Masters). My weakness is still the variability of my technique, I just need to bang out the reps and work on the fine adjustments.

Of course I have my new Flip Video UltraHD with gorilla tripod to play with, so I took along and filmed a couple of snatches. What do you think?

Now the other thing is, I’m trying to lose weight to get to the next weight category down, which is the 77kg category (169lbs or 12 stone 1). The reason is that the qualifying lift weight at 77kg is only 165kg, not 175kg which will make qualification easier. Also, there’s an outside chance, that I could qualify for the European Masters, as the qualifying lift for that at 77kg is 182, which is only 5kg more than my current personal best.

When I started 2 weeks ago, I was 182lbs (13 stone exactly or 83kg), so I had a fair amount to lose. Here’s how I’ve done and where I’m going (from Fitday), you can see I’m down nearly half way so another half a stone in 5 weeks should be doable, especially with the Zone diet to keep me going. 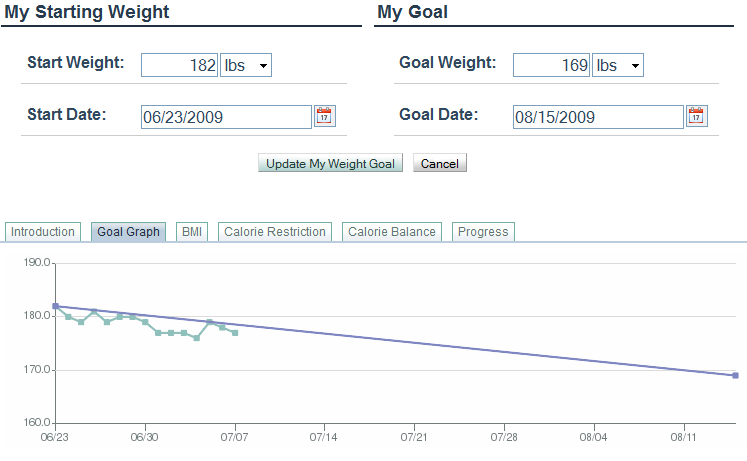