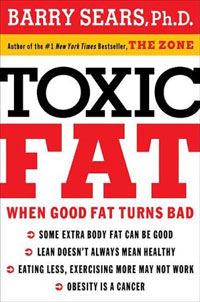 I have just finished the latest book in Barry Sears’ Zone Diet series: Toxic Fat. I’ve read most of Dr Sears’ many books that he’s written over the last 15 years of his research and whilst all containing good advice, some have not been great.

His first book Enter the Zone was a cracking book in terms of content, but was a terrible read for the layman. To be fair, I think he targeted the book at the medical profession as it contained a lot of in depth medical detail, but it was a tough read for someone without any such training.

What I’ve found most interesting in reading his books is how he’s adapted his approach over the years, not only based on his progressing research, but also in an attempt to make his material more accessible. Certainly Toxic Fat is the best example to date of this. In fact I think already it’s my favourite book by Dr Sears, as it brings together all the elements of his research and presents them in a succinct way that easily read and understood.

The initial chapters of the book deal each with a separate topic and Barry talks about fat deposits in the body as stores for Arachadonic Acid, which he is now casting in the same light as a cancer, as it exhibits many of the characteristics of cancers. He deals neatly with diet and supplements (mostly fish oil) in a way that’s easily understood and not overloading. What I particularly like are the examples given, with actual amounts and the dosages of fish oil are explained. How much fish oil to take is a very common question which Toxic Fat answers well. Though if you really want the low down on fish oil, I’d recommend Barry Sears’ Omega Rx Zone: The Miracle of the New High-Dose Fish Oil as a revolutionary book on the subject of fish oil.

If more detail is your thing, then there’s plenty to be had in the Appendices with in depth breakdowns of the physiology involved with everything that Barry Sears teaches. Of interest to many will be the sample menu plans for eating in the Zone Diet, which are accessible and easy to follow.

Altogether Toxic Fat is Barry’s best book in my opinion, and if you were only to get one Zone Diet book, this is the one I would recommend.