This you need a black belt to defend yourself from a mugging? Read this story (copied below) and think again: 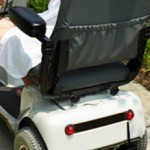 A disabled grandmother who fought off a mugging attack by headbutting a teenager has said she believes she broke his nose.

The 49-year-old, who is just 5ft tall, said she retaliated as the youths tried to steal her bag because she thought it was what her grandchildren would have expected of her.

The mother of six, who has asked not to be named, said her 24 grandchildren would have wanted her to make sure the criminals did not get their way.

The woman – who was travelling on a mobility scooter – knocked the teenager to the ground and the trio fled empty-handed in Barnstaple, Devon.

She said: “They were not expecting me to fight back.

“I am a very strong person because of what I have gone through in my life. As they attacked me, I heard my grandchildren saying to me in my head ‘Nan, get up and fight them’.

“When I headbutted the robber I think I broke his nose, it was that strong.

“Once they saw me attack him his mates scarpered and so did he.”

What can we learn from this story:

Of course nothing is certain in life,there are no guarantees, and only you can decide what’s right to do in any given situation, but find something in your life that is personal, present and you’re passionate about (the 3 Ps) which will give you permission to defend yourself if need be; and if attacked, know that fighting back will give you a greater chance of surviving the encounter with fewer injuries.

Well done to disabled grandmothers everywhere! Chalk one up for the good guys.

Next post: My Results After 4 Years on a High Cholesterol Diet