Where does the time go?? I seem to be having trouble recently putting posts up here, must try harder to write up stuff that goes on, so I’m a bit behind.

2 weeks ago I had the privilege of attending The Martial Arts Show with 3 SPEAR Instructors and another PDR Coach, to put on PDR demos and workshops on the Saturday and Sunday. It was a great event and brilliant to just to spend time with other similar minded people. This video gives an example of what we got up to, edited by the ever talented Neil Wilson:

Each of the 2 days we put on a 10 minute demo, followed a few hours later by a 30 minute Skill Share Session. The demo consisted of a series of Ballistic Micro Fights (BMFs) in the impressive looking High Gear that we were wearing. Each BMF lasts a very short period of time and are performed at a very high intensity level, sound familiar? 😉

Just to take a moment to explain the suits as I think they can give the wrong impression sometimes. First off, High Gear suits are not impact protection suits, in that they do not completely absorb the blows. You still feel every hit and hits can still hurt… a lot! They are impact reduction only and are designed to allow completely normal movement, whilst protecting the wearer from injury. In other words, expect bruises, but no broken bones!

Secondly, in no way shape or form do you need High Gear suits in order to learn or practice Personal Defence Readiness (PDR). They are a training aid only and in terms of self defence training for the general public, one that’s really designed for the PDR Coach (read bad guy) to provide a more realistic training environment for the student.

They do look impressive though and allow for explosive and very realistic looking demos. It was gratifying then to have a couple of people come up to us afterwards and declare that ours was the best demo they’d seen so far (maybe it was early yet).

We really had no idea how many people would rock up to the skill share sessions, so were very pleased to get 10-15 participants for each one, plus spectators. Especially when the previous and following sessions had only 3 and 1 respectively… but who’s counting! 😉

Whilst doing high energy BMFs in gear is fun, in many ways it was the skill share sessions that I enjoyed the most. It’s the education process I get the biggest buzz out of, knowing that I’m contributing in my own small way to making people safer and more confident in life. This was backed up by what was the highlight of the weekend for me, which happened on the Sunday session:

Neil was demoing and the drills and me and the other Coaches were then moving around the participants assisting. Starting with the bear hug drill I was working with to guys in their 50s. One told me he wasn’t sure what he’d be able to do as he had a weak left arm. Assuring him he could stop whenever he wanted, or could simply choose not to participate, we continued.

Even when we did the Saving Private Ryan drill and I had my full 80kg of weight on him, he was holding me off with ease. It was only afterwards and I was chatting to him about how he’d liked it, did he tell me that he had Parkinson’s disease and his left arm was virtually useless! {:-O He continued: “I was amazed I was able to do all the drills. I normally do everything with my right arm. You’ve made me realise my arm is not as useless as I thought.”

You can’t buy that. It’s a testament to just how natural the movements are in the SPEAR System that even with a debilitating neurological disorder, this man was able to increase his confidence and learn effective personal safety principles, and in just a single 30 minute session! That’s PDR and that’s priceless. Here are some photo’s from the weekend: 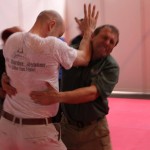 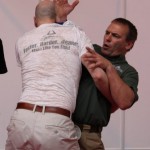 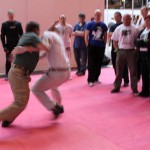 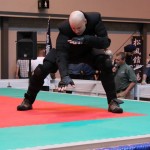 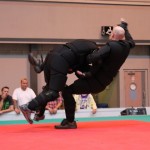 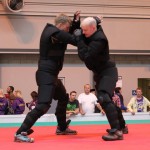 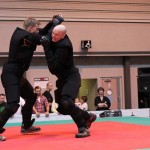 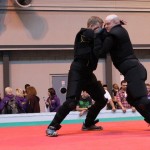 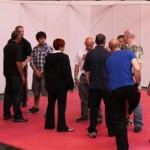 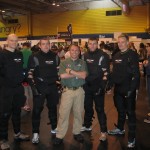 Next post: Weekend of PDR/SPEAR Training in Gorey, Ireland