Your Chance to Influence the ‘Squatters Rights’ Laws 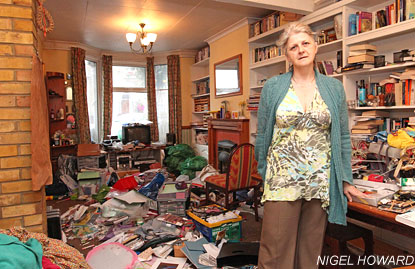 I came across a consultation by the British government yesterday asking for people’s opinions on squatters and that current situation where the police don’t get involved because Trespass is a civil (not criminal) matter. But when your house is possessed and trashed by squatters, like Julia High’s (right) was when she went away for the weekend, it seems pretty criminal I’m sure!

The full consultation document is here, but here’s the short version. The options are:

To get involved in the decision making process and respond to the consultation with your thoughts and feelings, you just have to email this address: squatting.consultation@justice.gsi.gov.uk My personal preference is for Option 4. My reasons are explained in the response I sent yesterday:

I would like to respond to the consultation request regarding squatting. I have no particular prior experience of this and am not affiliated to any associated group or organisation. As such I perhaps represent the silent majority, from whom responses to consultations are probably rarely heard.

I’d like to start by saying that this review and consultation is long overdue. Only a very tiny minority of society condone the behaviour of squatters and their “squatters rights”, whilst an overwhelming majority consider it unbelievable that in our civilised society, you can go out for a family meal and come home to discover you’re homeless for the next few months as some squatters have decided to move in while you were gone. This is clearly not right and something that the police should feel they are empowered to resolve immediately.

As a member of the silent majority, I don’t have enough iron in the fire to answer all the questions you have asked or give answers to each proposal in turn, so will jump straight to the point and say that I prefer Option 4. Creating a new offence is overkill and is one of the things the last Labour administration was infamous for. I believe Labour created over 4000 new offences since 1997. Let’s not continue that trend.

What ordinary people want is the squatters removed by the police. Enforcing current laws should accomplish this. Even if the squatters are not charged, at least arresting and removing them accomplishes what the property owner wishes. Then it’s a matter for the CPS to press charges as appropriate, but from the moment they are in police custody, the main problem is solved. It is common sense that a squatter has committed one or more of the following criminal acts:

1) Criminal damage. Until the property owner has regained access to their property, what is broken may not be obvious. Arrest the squatters and allow the property owner to determine the extent of the criminal damage. If none is subsequently found (unlikely), so be it. The problem is still solved as the squatters have been removed. Bear in mind that criminal damage could be something as simple as a bit of dirt on the carpet or a broken blade of grass. Where someone’s property is concerned and the police are trying to find the legal hook with which to do the right thing, then the letter of the law should be used in the extreme, in order to aid the property owner and bring about a just conclusion.

2) Theft of electricity. As soon as a light is switched on, or mobile phone charged, or fridge used, electricity is being stolen. Arrest the squatters for theft, how much can be determined later.

3) Theft of gas. Using the heating or cooker is theft. Arrest the squatters for theft, how much can be determined later.

5) Even if none of the above apply, how about theft of air. I own everything in my property, including the air that’s in it (I believe). If a squatter is breathing, he’s using my oxygen!

I know the last point sounds silly, but the point is that there are already lots of criminal offences that a squatter has / could have committed, certainly enough to justify an arrest, which is the aim of the property owner. Common sense should be applied and the police should enforce what 99%+ of the population would consider the “right thing to do” in the spirit of the law and natural justice. Even if there is just the allegation of theft by the property owner, then in this circumstance the police should arrest the squatters, so that they can be interviewed properly about the allegation down at the station. Again, problem solved.

Just to pick up on one last point, your consultant document paragraph 34 says: “the people inside might claim the damage occurred before they arrived at the property.” in which case benefit of the doubt should always be given to the property owner, not the squatters.

I hope that you have found my reply to be constructive.

If you have any opinion on this matter, I would urge you not to leave all the responses to a vocal minority, and let the law makers know directly what you think. This is Democracy in action, what our (and others’) troops are dying for right now in foreign countries.

Next post: Burpees with a Torn Rotator Cuff, Yay Burpees!