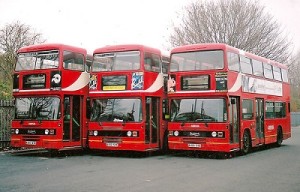 I know, I know, it’s been some months since my last update (maybe this should be called a Quarterly update?). Why the delay? Well firstly that’s because I had nothing much to report having spent another month at the auctions, then like buses 3 deals came off all at once and I was too busy to get round to it. Welcome to the roller coaster that is the property business. 🙂

In this update I’ll detail another auction cycle, buying a house in Telford, structuring a Joint Venture, “selling” 3 flats in Bury, some interesting points about lease options, a thought tax no one tells you about (yes really), buying 4 flats in Bristol, and finally how to save £thousands when buying flats.

Back in January I said that the December auctions cycle had proved fruitless, and I was expecting the February cycle to be super busy because of the 3% stamp duty hike. I was right. So I wasn’t going to bother because I figured there’d be too many buyers pushing prices up, however what also happened was loads of sellers rushed to sell too, realising the 3% stamp duty will have the effect of dragging prices down. Pughes for example reported their biggest auction for a decade. I figured increased supply would balance the increased demand.

And so I got sucked into the auction cycle again in February. It’s hard not to. I guess it’s the girlie equivalent of shopping. What’s not to like about hunting for that property bargain and going round viewing properties? It’s something that I quite enjoy, and so I was pleased to come out with a shopping list of 7 properties to bid on.

Sadly I should have stayed at home, they all went for too much. I should have stuck to my original thoughts that demand would push prices up too much. However I did get to take my daughter to one of the auctions as she was on half term, which was an interesting experience for her. Just couldn’t quite get her to raise her hand. 😉

Another month wasted *sigh*. You have my permission, if you see me walking round with an auction catalogue under my arm, to punch me in the face and steal it, you’d be doing me a favour!

I mentioned back in January that of the 10ish deals I’d looked at I’d agreed to do a JV with my friend Nathan McIntosh in Telford. It’s a simple 2 bed semi, owned by a lady who’s gone into a home now. It was an unregistered property so there were months of delays whilst Land Registry registered the title. A one point we thought we were going to get the unregistered land behind the property too, but sadly after a title dispute, that was kept of the title.

We completed on the purchase in March. It needs a full refurb, which has already started, and it should be back on the market next month. I’ll give numbers as a case study when it’s all done.

How to Structure a Joint Venture

Just as a side note, here’s how I do a JV. Have 1 person buy the property in their name. Have 1 person responsible for the work/refurb. Have a Joint Venture document that describes who does what, what costs are shared, how profit is split, and what to do if things go wrong etc. There are lots of reasons for doing it this way, but the main ones are:

2) It keeps lines of responsibilities clear. 2 bosses on 1 job is not a good idea. So for example, the solicitors, and builders, etc know exactly who their boss is, and aren’t getting confused with conflicting instructions.

Regular readers of my blog / newsletter will recall I’ve mentioned the 3 flats in Bury that I acquired on lease options many times. I’ve been joint venturing with Trish McGirr on this deal and we’ve finally sold them on to another investor on a 7 year lease option with all flats tenanted. We are now just sat in the middle of the deal, taking a profit as cash passes through. Here are the rough figures:

This is a true Win, Win, Win scenario.

Win 1: The owner has washed his hands of the flats, is getting his mortgage paid and will have the balance paid off at the end.

Win 3: For the investor, for £10k up front, they basically get a free flat for 7 years (their monthly fee is paid by renting just 2 of the flats out, which are already tenanted) and 7 years’ capital growth less another £10k at the end.

I know some people worry about Options (or Leases with Options if you prefer) on properties. Just to be clear, that’s where you have the choice to buy a property / some land at a fixed price, within a certain time frame. The seller must honour that agreement or face legal action, but as the buyer you don’t have to. It’s an option to buy, not an obligation to.

If you’re only used to the normal purchase process of a home or buy to let, they can seem alien, but they are a very normal process. The whole futures stock market runs on them and they’ve been very commonly used in commercial property deals for centuries.

It was interesting then when I was going through the conveyancing pack for the Telford purchase (at 7am on a Sunday morning of course!) and noticed it contained a copy of HMRC’s Land Transaction Return form (the Stamp Duty form). On the very first page, question 8 asks:

> “Is the transaction pursuant to a previous option agreement?”

It just goes to show that HMRC acknowledges that options are an established part of the property landscape, and so common it’s one of the first questions they ask. So you should not feel concerned about using them, if the opportunity presents itself. If you come across something where you think they might be useful, I’d be happy to talk you through the issues, just get in touch.

It’s actually not obvious at first why HMRC is asking this question though. Why on a Stamp Duty tax form are they asking about options, which is a property transaction that hasn’t actually happened yet?

The reason for this question is that Stamp Duty is actually payable on the option fee, at the time the option is taken out… I know, they’re taxing you on something you haven’t done yet! In may ways an option is just a formal way of saying “I’m thinking of buying this property, if I did, what would the price be?” So in many ways it’s actually a “thought tax”, you’re being taxed on something you’re thinking about doing. Shocking huh?

What’s more interesting is that in 4 years of reading, listening to and attending property training courses I’ve never heard a single person mention that small but potentially important tax.

Fortunately it’s not something that normally comes up with my line of work, as the option fees tend to be small. In my Bury flats example, I paid was just £1 option fee for each flat. 🙂 But be careful if you’re ever doing a bigger deal, on some prime land before planning say. If you want to know more, HMRC even have an example showing someone using an option to purchase a property and the tax due at each stage:

So don’t be worried about options, because you know when something’s being taxed, it must be completely normal. Haha.

You may or may not recall that back in July 2015 I agreed to buy 4 flats in Bristol with my very good friend Alex Venables. Well 9 months later and a conveyancing nightmare, we finally got them over the line, at 16:15 on the 31st March, literally hours before the 3% stamp duty rise kicked in.

That was a definite roller coaster I can tell you, especially when at 3pm the bank called to say that the insurance I’d taken out the day before didn’t have subsidence cover. WTF? What kind of buildings insurance doesn’t have subsidence? I called the my broker to be informed that because we were planning on a quick refurb and flip, the appropriate policy was a short term refurb policy, and they never included subsidence, because they’re typically measured in months.

But she pulled a blinder, got on to the underwriter and got subsidence cover added to the policy within an hour. It was a bit more complicated than that, but that’s the gist of the story.

Back to the flats then, 2 are empty and 2 are tenanted with 9+ year tenants who aged 60+ and may well stay in till they die, so we’re looking for 2 home owners (probably) to buy the empty ones, and 2 investors who want modestly discounted flats with existing great tenants, in a definite capital growth area… Bristol property went up 12.5% in the last year according to HomeTrack. If that’s you, get in touch ASAP. To be honest I’d prefer to keep them myself, but that doesn’t help hit my business plan targets, so I’m selling them on.

How to Save £thousands Buying Flats

Ok, confession time: I actually quite like Tax law. Why on earth would I like something so dull you may wonder? Because if you know what you’re doing, you can save a fortune just by knowing you have to tick a different box.

“But that’s what I pay solicitors and accountants for.” I hear you cry. Well if I’d taken that approach, I’d be £4k poorer now. Here’s why:

There’s something called Multiple Dwelling Relief when it comes to calculating Stamp Duty. It comes into play, you guessed it, when you’re buying multiple dwellings in a single transaction, and means that the Stamp Duty you pay is based on the value of the individual dwellings (flats in this case) not the whole building, subject to 1% minimum.

Here’s the rub: my solicitor (who in all other matters was exemplary) either forgot this or just didn’t connect the dots, and sent me the Stamp Duty form based on buying a single dwelling at the full price, not 4 smaller dwellings added up. For these 4 Bristol flats, the saving by claiming Multiple Dwelling Relief was over £4k! If I hadn’t known about it, and I hadn’t checked the form, I would have just signed it off assuming he was right.

My point is, it pays to educate yourself in property tax, as boring as you may find it, as at the end of the day you’re the one who’s paying and other people will never be as careful with your money as you are.

So that’s it. Maybe I’ll get back to a monthly update in May, maybe this will become quarterly now, that all depends on if I’ve got something to say, and how busy I am. If you have any questions on any of the things I talk about, feel free to connect, I’m happy to help if I can. 🙂