I watched a shocking bit of TV the other day, about Manuel Uribe, who is (or was) officially the fattest man on the planet, weighing in at about 1/2 a ton, or more specifically: 1,200 lbs, 87 stone or 550kg! Not surprisingly, he hadn’t left his bed for 5 years! This is he: 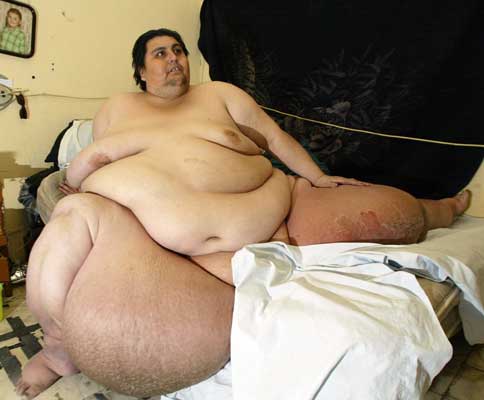 Faced with certain death, a local news crew advertised his plight and put out an appeal for help. Surgeons from all over the world offered him free surgery for this, that and the other (Gastric surgery and all that). All highly risky (given his size) with a significant chance of death on the table. However, he was also visited by dieticians from around the world, including representatives of the Zone Diet in Mexico.

Amazingly, Manuel Uribe decided to forgo the offers of surgery, and opt for the Zone diet. Out were his Tacos and Pizza, and in was adequate protein, low glycemic index carbs, with a dash of fat. E.g. sliced meat, or omelettes with a load of veg, a staple of the Zone diet. Now that he’s not getting fatter on excessive carbs and fat, and for the first time getting enough protein, guess what? Manuel Uribe has lost 400 lbs (180kg / 26 stone) in 12 months! That’s a third of his body weight, just through eating!

If ever there was a test case giving proof that the zone diet works, then surely the fattest man on the planet losing 1/3 of his body weight in 1 year has to be it. But strangely, I bet he doesn’t win Weight Watcher of the month. No no no, that would be the wrong message to give out: “eating less carbs”, surely not! We can’t have radical unscientifically proven fad diets like that going about. What do you mean it’s a balanced diet that works in harmony with the bodies hormones and reverses the high sugar = obesity, heart disease, diabetes and premature death diet of the 20th century?!?

The sad reality is that most people are blinded by the official party line that fat is bad and carbs are good. If that’s the case then why is obesity and all it’s related ills now at epidemic proportions? A recent study in America stated that of kids born in 2006, at current rates, 1 in 3 would be a diabetic in their life time. ONE IN THREE!!!!!! I was shocked by that.

There is a simple truth, that you need to take away from this post if you are at all concerned about your weight or health: “Fat doesn’t kill people, carbs do.” The Zone diet will change your life, it could even save it.