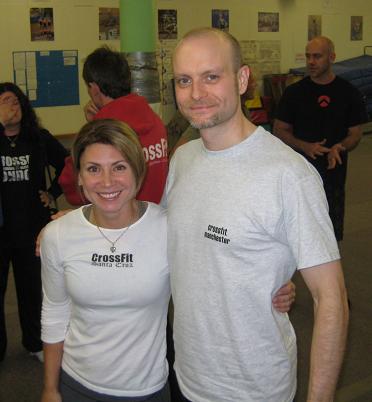 At the risk of sounding like Bill and Ted, day 2 of the Crossfit Certification at Manchester was another totally awesome day. The day started off with a lecture from Todd on the 3rd set of the 9 core Crossfit movements: Deadlift, Sumo Deadlift High Pull (SDHP) and the Medicine Ball Clean, followed by practice outside.

After was an open floor Q&A session with Coach Glassman. I’ve read a few things online about Coach, but Greg is in reality a most unassuming man. This is me with Coach, he was very gracious to pose for so many pictures. 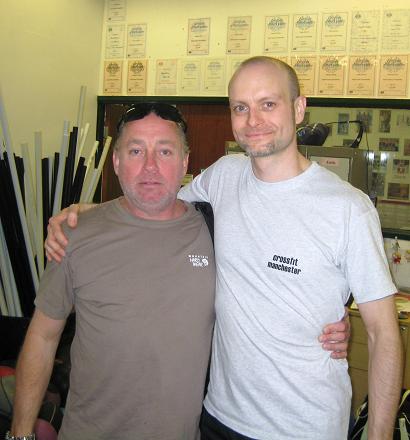 For someone who heads up an international exercise movement with an estimated 300,000 followers, he’s surprisingly modest about his achievements. I took several key points away from the session, which covered a whole host of topics:

One thing that I really came away with was simply this: Greg Classman has a great manner about him, he’s an unassuming but capable orator, who engenders trust and loyalty in those that listen to him.

After lunch was a lecture by Nicole Carroll on nutrition and recommended Crossfit diet: The Zone Diet. In case you can’t guess, I’m the not the pretty one on the left! 😉

The Zone diet stuff was nothing new to me, I’ve been on it for 18 months after all, but it was interesting to see some of Nicole’s slight variations on the Zone prescription in terms of things like the frequency of cheat days and the minimum blocks to prescribe for small people.

There followed the main workout activity, which included 5 stations:

Later Todd talked again about general Crossfit methodology, the ways to combine the 3 main types of workout: Weightlifting, Gymnastics and Mono-structured (running, rowing etc). It included topics on the 3:1 work to rest day ratio vs the 5:2. Also an example of how to scale a WoD for different ability levels of Crossfit client.

Ultimately that was it. There were photo sessions and plenty of time for questions of all kinds to all people and I don’t believe anyone went away with anything they wanted to ask unanswered. All together, the weekend was great, and that’s all I can say about it. If you get the chance, you should go on a Crossfit cert. This is the Crossfit Manchester crew with all the Crossfit Coaches: Greg, Nicole, Todd, Jimmy and Andy: 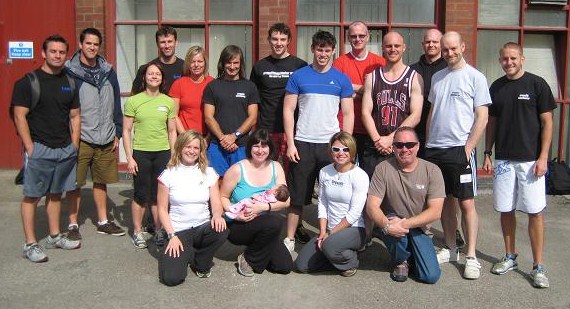