Back in June I entered my first local club Olympic Weightlifting mini-competition at West Wythenshawe, Manchester.  This weekend we did it again.  It’s not really a competition, as there’s such a broad range of ages and weights that it’s unlikely you’d find anyone in the same category. So really it’s just for fun and practice in a competition setting.  It’s surprising how a roomful of people all staring at you, can put some people off.

Last time I lifted 45, 50 and 55 in the Snatch and 70, 75 and 80 in the Clean and Jerk (see my video on YouTube) so I was hoping to do better this time.  However I’ve been changing my Snatch technique, making a major change only last week, so the possibility for disaster was high.  Fortunately it went pretty well, I got 50, 55 and 60kg for the snatch, an improvement of 5kg which was nice.  Here’s a picture of me just steadying the 60kg snatch at the top, I’m concentrating hard!

On the Clean and Jerk we were all surprised by the timing and so were behind on the warm up lifts.  I started on 75 but had not even lifted that in the warm up!  The 75 was easy however so I jumped to 85 and then 87kg.  A nice 7kg improvement on last time.  Here’s the top of the clean with Judge Dredd chin going on: 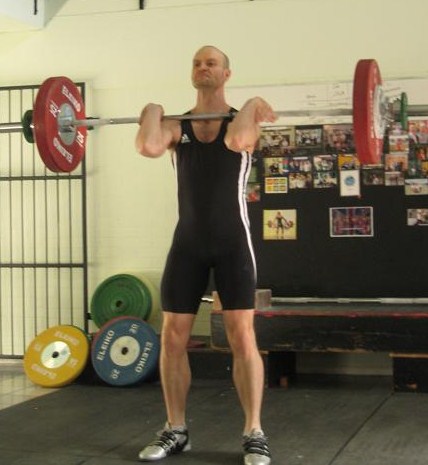 I’ll sort out a video of the day next week as the copy I’ve got with me is too poor quality.  Thanks go out again to Les at West Wythenshawe Weight Lifting club for organising it, and the great bunch of lads he has there.  Also to the BWLA guys who came to officiate and ref.  This was my first lift as a registered British Weight Lifting Association member.

Oh, do you like my spangly new weightlifting suit?  Hmmm lycra!  😉