This weekend I had the privilege of attending what I believe was the world’s first Crossfit Kids instructor’s certification outside of America, at Crossfit3D in Trafford, Manchester. In attendance were the entire Martin clan, the progenitors of Crossfit for Kids and by that I mean the first instructors and the first students, because Jeff and Mikki Martin first trained their own kids in Crossfit. 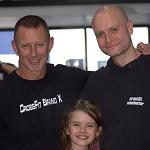 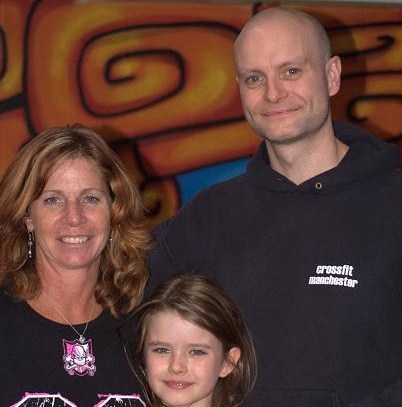 I’ve really struggled with where to begin to describe the course, as there was just such a wealth of knowledge imparted by the training team, it’s almost too much to take in. We covered a vast array of material that draws on nearly a decade of experience in teaching children, from as young as 3 through to 17.

Of course there’s the material on what exercises are right for what age range. Including when to add weights, how much and in what increments. How much of a focus to put into form and how to get it across to the right ages for example, you can’t say to a 5 year old who you’re trying to teach the shoulder press to: heels under your shoulders, toes pointing out a bit, hands to shoulders, elbows in, mid section tight, now press, head forward, shoulders to ears etc. But you can tell them to jump up and down a few times, point their elbows at your knees, then push the sky up!

Breadth and depth are the 2 words that best describe the course. Of course we covered the 9 fundamental Crossfit movements: the shoulder press, push press, push jerk, air squat, front squat, thruster, deadlift, sumo deadlift high pull, and the medicine ball clean. But each one taught with a focus on the needs and limitations of three different age groups:

There were also talks on various topics which included subjects like: the origins and aims of Crossfit Kids; how to structure classes at the different age groups; safety, learning types; coaching cues; various science lectures e.g. about the brain’s development and its relationship to exercise, and scientific research into safety in sport, injury rates and bone density etc; how to fix common mistakes in all the exercises; teaching styles; general nutrition and how to educate the kids and deal with disagreements from parents; programming at various ages; how to motivate kids of all ages, with tricks and tips; trainer ratios; class sizes and even optimal kid placement in classes; a focus on sport specific athletes; internet safety and photography; health issues; business development etc etc etc!!!

You get the point. There was a ton of information which is absolutely invaluable and necessary for anyone who has an interest in teaching fitness to under 18s. I cannot recommend doing a Crossfit Kids certification course enough, it was amazing.

Probably the most amazing was seeing the fruit of Jeff and Mikki’s labours though, in the evidence provided by their 3 fine boys: Connor, Keegan and Duncan, and their friend David. I think you’d be hard pressed to find a group of stronger and fitter teenagers anywhere. These guys epitomise what Crossfit is capable of, in terms of building incredible athletes who can apply themselves to a broad range of physical endeavours. One anecdote about David probably sums it up nicely. It was a long story, so I’ll paraphrase:

David decided he wanted to run a sub 5 minute mile, and a marathon. Coach (Jeff) pointed out that whilst the mile was a good goal, the marathon was stupid, and as he’d already programmed his next 6 weeks of training and wasn’t going to change it. That very weekend, despite having not run more than 800m at any point in the previous 6 months, David decided to do it any, in fact he decided to kill both birds with one stone and ran the first mile of the marathon in 4:47 (or something like that, it was 4: something) and continued to run the rest of the marathon, finishing in 3 hours 29 mins (or similar). Pretty impressive without any marathon training whatsoever, but get this: on Tuesday he was back at the gym doing heavy squats, and continued to achieve personal best lifts at every session for the next 10 days!

Now that’s Crossfit and that’s the kind of fitness that years of Crossfit Kids training can achieve.