I’m very pleased to announce that having got my certificate through, I’m officially a certified Personal Defence Readiness (PDR) Coach: 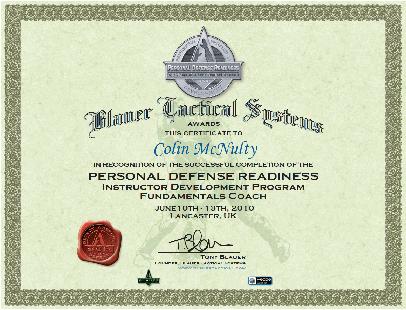 If you don’t know what that is, it’s the general public side of Tony Blauer’s SPEAR system of self defence. But “self defence” doesn’t really come close to describing it, as that phrase implies it’s all about fighting and techniques, and it’s so much more than that. Using the techniques taught in the PDR classes that Karl Steadman and I are putting on at Crossfit 3D on a Monday night, the chances of you detecting and avoiding or defusing any confrontation increase significantly. It’s our aim to teach you to avoid violence wherever possible. Violence Avoidance and Conflict Management would be a better description. Of course if it comes to it, you’re also going to get amazingly simple yet astonishingly effective self defence skillz.

Take this simple example: my daughter has been doing karate for coming up on 2 years now and they do self defence sessions where they teach how to defence against a knife attack. I thought I’d see how she was doing, so attacked her with a “knife” (actually a pair of socks!). She got “stabbed” 3 times out of 3; she didn’t know where I was going to try to stab her as I changed it each time.

So I spent 2 minutes showing her how the SPEAR tactic also applied to a knife attack and we tried again. After just 2 minutes training, my 9 year old daughter successfully defended herself from 2 out of 3 knife attacks using what I taught her. That speaks volumes as to the simplicity and efficacy of the SPEAR System. It’s not about tapping into your potential, i.e. what you might be able to achieve after years of training, but teaching you what you can do now, with the capacity you have at your disposal today. Tony’s system has made my family safer, it’s as simple as that. 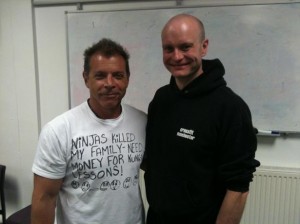 Just to be clear, I’m not dissing karate or martial arts here. I fully believe that they are a great thing to do and will continue to send my daughter to karate classes and potentially other martial arts in the future if she wishes. I also regret not doing a martial art when I was younger and have seriously considered doing so as an adult (and one day I might). However martial arts are sports, and I don’t believe that an organised sport is the best basis on which to build a realistic system of defence from a street attack.

And it’s realism that’s at the heart of PDR training. We look at what your body does and how it reacts to real life situations. By body, I mean you mind as well as your physical reactions. Answer this question (feel free to post an answer in the comments):

In a street attack, where is the first place you get hit?