A few weeks ago I put up a video of the Cross Extensor Reflex, which is what the SPEAR System calls the reflex we have to grab on tight to whatever is in our hands when we’re surprised. It showed a woman nearly getting mown down and running for her life, but not letting go of her shopping bag!

This video explains (I think) why we have this seemingly odd reflex. I say it’s odd, because it’s not helpful for an adult to have such a reflex. Checkout this classic picture: 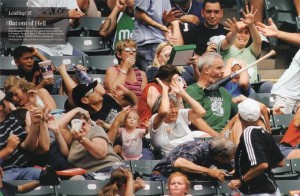 What you see here is the bat flying into the crowd and everyone flinching (everyone except one that is!). It’s a classic because if you’ve ever been on one of Tony Blauer’s Personal Defence Readiness seminars, whether given by him or not, you’ll have seen this picture as it’s used to demonstrate the flinch response we all have.

But this photo also shows the Cross Extensor Reflex (CER) as there are several people, who despite flinching desperately to avoid the bat, haven’t dropped what’s in their hands, which often leads to some very weird flinches indeed! However, on to today’s video, which demonstrates why we as adult humans have this reflex:

Ok so hopefully you get the point now. The real question is, what use is this? Knowing that you will have this reflexive response to grab onto something when you’re startled, how can we apply this to our world here and now to improve our personal safety? We’ll be discussing this at tonight’s PDR class at Crossfit3D.