Curses! February has not gone quite according to plan, take a look: 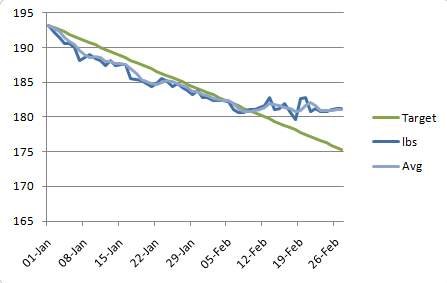 It was all going swimmingly well and I’d been losing about 2lb per week throughout January, until about the 7th Feb, then I hit the dreaded plateaux that so many dieters encounter, and in fact I hit the exact same thing at the same point back in 2008. So what happened?

And so it is. In many ways, I blame the Zone diet for being too good! It almost encourages you to cheat, because losing weight becomes so easy when the weight just falls off, you’re eating good and tasty food and you’re rarely hungry.

Looking at it another way, I’ve just switched to maintenance mode 6 lbs too soon. In February I’ve:

And yet… I’ve still lost weight in February, and whilst I’ve hit a plateaux, I’m not putting any weight on. Which is pretty amazing considering the list above!

EDIT: if it doesn’t translate into American, this is “Pick & Mix”: 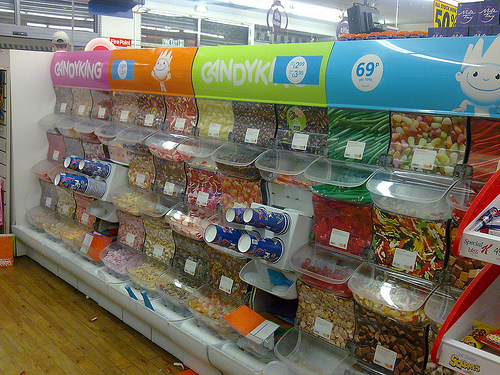 So really I need to decide: am I happy with my weight and the balance of food that I am eating (yes to both by the way), or do I renew my efforts to get to the 12st7 (175lbs / 80kg) I originally had in mind? Remember it was an arbitrary target. I have already lost 2.5 inches off my waist and 5.25 inches altogether, although another inch or 2 off my waist wouldn’t hurt.

I think on balance I would prefer to lose that last 6 lbs, I just now need to think over what time scale?

Next post: The Golfers Elbow Treatments & Exercises That Cured Me