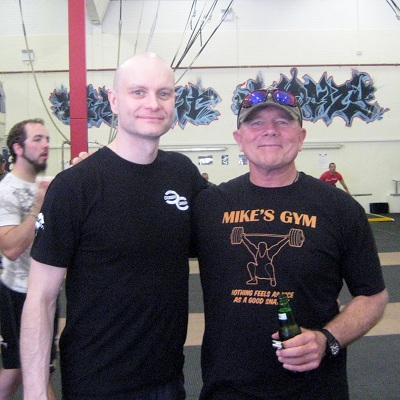 Given my rotator cuff tear of the supraspinatus I very nearly cancelled going on this weekend’s CrossFit Olympic Weightlifting certification. Boy am I glad I didn’t! I of course had heard that Coach Mike Burgener was, apart from being quite a character, a great Olympic weight lifting coach, but that doesn’t do the man justice.

To be honest I’m rather struggling for the right words to describe him, without sounding like I’ve been caught in the cult of Burgener! That would be wrong though because Coach B certainly doesn’t have the ego for it. In fact one of the first things he said was that what he teaches isn’t the only way, it’s just his way. Frequently throughout the 2 days he reiterated that many things he was saying were not cast in stone (my words) but would be right for 90% of athletes. This was backed up with videos showing world class weightlifters using differing techniques. It’s all too easy for experts in any field to tout the line: “It’s my way, or the high way!” which is not something Mike Burgener does and you can only respect him more for it.

When the arms bend, the power ends.

One thing that surprised me was the amount of work that was done with just a PVC pipe. But this is a reflection of Mike Burgener’s focus on fundamentals approach. After all, what’s the point of practising the wrong thing? As he said: only perfect practice makes perfect. So the entirety of day 1 was spent on snatch drills with the PVC pipe. Don’t make the mistake of thinking this a bad thing however, it’s a very good thing, and there was plenty of opportunity for people to lift weights under Coach’s expert eye over lunch. Indeed many people pulled off impressive jumps in their personal best lifts, and yes, I’m very jealous I wasn’t able to be one of them!

Slow is smooth, smooth is fast.

Day 2 saw a review of the snatch work from day 1, then clean and jerk drills, this time with an oly bar, though the most I saw being used was 50kg. Sadly I couldn’t participate in about half of the jerk drills due to my torn supraspinatus but that’s no bad thing either, as I was able to focus on my coaching skills, which was the main point of the cert after all. It is frustrating to know that there are so many mistakes in my own form now that I can not only identify, but know how to correct, and yet it may be a year or more before I can work on them. That’s life though.

I’m not going to go on too much, other than to say, if you have any interesting in Olympic weightlifting, as either a weightlifter yourself or as a coach, you can’t go wrong attending one of Coach Burgener’s CrossFit weightlifting certs. Well worth the cash. And of course you come away with a shiny certificate like this one, which is always nice! 😉

Next post: Self Defence Lessons from Jaycee Dugard’s Abduction