A little while ago I posted about my torn rotator cuff (PASTA lesion), well this week I went to hospital for a shoulder scan, looking for a SLAP Lesion Tear. Just to be clear about the differences here, the terms mean: 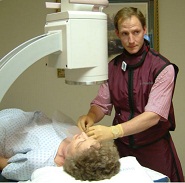 Neither of these is a good thing to have! Diagnosing the PASTA tear was relatively easily and completely painlessly done via an ultrasound. The SLAP diagnosis was done with an MRA though, which is not so pleasant. MRA stands for Magnetic Resonance Arthrogram (sometimes Magnetic Resonance Angiogram) or more succinctly can be described as MRI + contrast dye.

The reason for this is the doctor needs to make sure the needle is exactly in the right place in your shoulder joint so that the labrum shows up properly in the MRI scan. So after an initial local anaesthetic, he sticks the big needle and, takes an x-ray, adjusts it, takes an x-ray etc etc until it’s right. Then he injects the contrast dye, which is another unpleasant experience I could do without repeating. But it’s worth it in the end, as the MRI scan shows up the labrum very clearly.  Note that this isn’t my picture, it’s just one I found on the net, I have yet to see my own scan images. 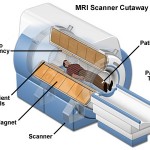 I was also a bit nervous of the MRI scan itself, as you never know really how you’re going to react to the claustrophobic environment that an MRI machine puts you in, especially as I’d never been head first into an MRI scanner before. Apparently they reckon that 10% of the population is so claustrophobic that they can’t have a tradition MRI scan (there are new walk in MRI scanners now that aim to solve this problem). 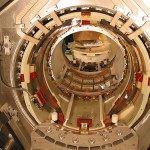 The other fear factor often cited is the noise, but personally I think it’s just the whole unknown thing, so I did some research into how MRI machines work and found it quite hard to find pictures of their innards. This one on the right shows the inside of an MRI scanner face on. Click to enlarge it to get a better view.

In the end though I was fine with the MRI scan. Sure I can see how people would get upset by it, but it’s completely safe and ultimately it was simply loud and boring. It’s amazing how many itches and twitches you find the moment someone says to you: “Please lie as still as possible!”.

Previous post: No Charges Against Man who Stabbed Burglar to Death