I have far too many books in diet. Actually that’s not true. I have a lot of books on diet and health and wellness and sleeping and fish oil and such things, but there’s always room for more books! And this new book by Dr William Davis, MD: Wheat Belly: Lose the Wheat, Lose the Weight, and Find Your Path Back to Health ticks all the right boxes.

First off, it’s by a life long cardiologist. Someone who has spent their career fixing people’s heart disease.

Dr Davis had many heart disease risk factors himself and followed the standard advice: eat low fat and whole grains, banish meat, increase vegetable oils and take up jogging. Imagine his surprise when he gained 14kg (30 lbs), his good HDL cholesterol when down, his bad triglycerides went up, and he became diabetic.

For many people this would have been a death sentence, but fortunately the good Doctor had the sense to recognise that what your Doctor’s tell you is wrong and throw out the bad advice. He cut out all grains (wheat, barley, oats, corn etc) and quickly reversed the above trend. Even curing his diabetes! This is what he had to say about it:

“Cutting wheat products in my diet, in particular, proved the dietary turning point that reduced my appetite, accelerated weight loss, and just helped me feel clearer, more energetic and happier than I’d felt in years,”

Will society wake up to this simple diabetes cure?

Dr Davis now refers to the “low fat, high carb” period thus: “We’ve lived through 40 years of a failed experiment” I’d go further than that and say that history will record the 20th century as the dark ages of dietary advice. Not only have millions died an early death because of it, the repercussions of eating a high grain, high carb diet could well bring down the National Health Service (NHS) in the UK, just by being overwhelmed by diabetes patients alone. The question is, will society wake up to the simple diabetes cure Dr Davis found before this happens?

It’s not just wheat that’s the culprit, although it’s probably it’s ubiquity that makes it the worst grain. Interestingly Dr Davis rounds on the plethora of gluten free products that are full of all sorts of other grains: corn starch, potato starch, rice starch etc, which are just as bad. The fact is, we’re just not designed to eat these foods.

Give up wheat for a 2 week experiment 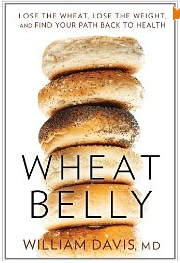 I have personally persuaded several ill people to give up wheat for 2 weeks, to see if it would clear up their Irritable Bowel Syndrome (IBS) symptoms, and without exception the experience has utterly changed their lives for the better. If you ever feel lethargic, bloated, have bad wind, diarrhoea, craps, reflux etc, then you owe it to yourself to try a 2 week experiment that could change your life.

Getting back to the book, this is definitely going on my (ever growing!) book list, even though I already know most of what it’s going to say. Good information doesn’t displace good information. It looks like my other dietary books will have some company soon!

Next post: Corticosteroid Injection Side Effects for Golfers Elbow

Previous post: Exercise from Day 1 may be best after SLAP Surgery