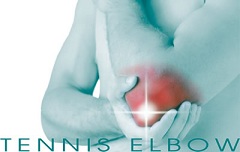 I do try to keep up with what’s going on in the medical profession when it comes to golfer’s elbow treatment and recently came across this interesting article regarding a particular case of steroid injection for golfer’s elbow. If you don’t like all the technical speak, skip straight to the last sentence which is the most important one:

Intraoperatively, the atrophied skin and subcutaneous fat tissue were excised from an ellipsoid incision. Two chalky, whitish deposits of corticosteroid were observed over the flexor aponeurosis. The deposits were excised. The common flexorpronator origin was partially detached by sharp dissection and reflected without disturbing the medial collateral ligament. The underlying fibrous tissue was debrided. The medial epicondyle was drilled, creating multiple bleeding small holes, and then the flexorpronator origin was reattached. The adjacent subcutaneous tissue and skin were released and brought over the epicondyle, forming good soft tissue coverage. Three years postoperatively, the patient had unlimited range of elbow motion with no epicondylar pain, and no pathologic bony prominence of the epicondyle was observed.

Although steroid injection for the conservative treatment of medial epicondylitis is an alternative method, previously reported complications of periarticular injections and the case presented here demonstrate related adverse effects or complications. Injection into the medial site of the elbow may not be as innocent as expected if appropriate injection technique is disregarded.

Now I don’t want to be a doom munger here and if you read the 150+ comments on my golfer’s elbow cure page, you’ll notice that a few people have experienced good success with steroid injections, and I realise that this article is referring to poor injection technique. However my personal view is that injections of corticosteroid for medial epicondylitis is generally a bad idea. Not just because it can go wrong, in the case of the lady above, but also because it’s just masking the pain rather than treating the cause. If you like weightlifting like I do, I think there’s a real risk of making the injury worse. After all, the pain is there to make you aware that something is wrong and needs your attention. Pain is your friend!

As if getting over golfer’s or tennis elbow wasn’t wasn’t bad enough, you have to watch out for scammers too. Take a look at this blatant scammer on Amazon selling a single elbow pain product called TenDLite LED. Why do I say this is a scam? Here’s why (figures correct at the time of writing):

Maybe I’m being harsh, but I don’t think I’m wrong. Watch out guys and gals, not all is as it seems out there, and at the end of the day, it’s your health that’s at stake, or at least your hard earned cash anyway.