The Calorie Values on most Food Labels are Wrong 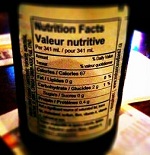 Further to my very popular recent article on why calorie counting is flawed, I just received this link by email from a friend, which exposes the fact that the calorie values on food are all wrong, because they’re based on the raw ingredients of food. Whereas in fact as soon as you cook / process food, the available energy is increased, so the calorific value should increase too. (It also contains disturbing stories about eating raw monkey meat and a video of mice eating live albatrosses!)

I do include “processed” whereas his article is more about cooked, because even raw foods have an increased GI from processing, for example oranges’ glycemic index (44) is 18% higher when it’s processed into orange juice (52), see the GI chart on the Southbeach Diet Site. That’s why any kind of fruit juice is bad from a weightloss perspective, due to the breaking down of the plant cell walls during juicing. It’s far better (and a whole lot more satisfying I’d say) to eat the fruit just as nature intended.

Either way, it’s all more fuel to the fire that counting calories is a simply flawed approach to diet and weightloss. Even Weight Watchers have recently ditched their calorie based points system, admitting that they’ve been getting it wrong for decades!