Curiosity – One of the great Engineering Feats of Man 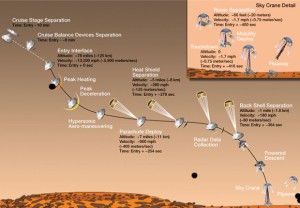 You must have been living on the moon (haha) not to have heard about Curiosity (NASA’s nuclear powered tank) landing on Mars this week. As a Chartered Engineer myself I confess to being awe inspired and jealous of the team that conceptualised, designed and built what is a superb feat of engineering. If you’re not aware of exactly what was involved, this is one of the best videos I’ve seen on the subject:

I’ve heard say that a manned trip to Mars is 50-100 years away, but that’s the USA talking. I predict that the first human to step foot on Mars will be Chinese, and it will be a lot sooner than that.

There is one good reason why we haven’t been to Mars yet, and that is, it’s damn difficult to get the astronauts back home again, because you have to ship all the fuel they’ll need for the return journey, and a vehicle capable of leaving the Martian surface. That adds a huge cost and complexity to the endeavour.

BUT, what if it were a one way trip? You see it’s not a question of IF but WHEN a mankind-ending meteorite will hit the earth in the future? So I consider this to be mankind’s greatest challenge: can we organise ourselves enough to manage to sustainably leave our planet, before consuming all the planetary resources necessary to do it, or having the requisite civilisation destroyed (by a meteorite or ourselves)

One day, a human will leave our planet, never to return. That’s an unquestionable inevitability. The question is only when will that happen? Perhaps that sounds extreme, but as I’ve said before, if you asked for volunteers for a 1 way trip to Mars, you’d have a queue from London to Liverpool of potential volunteers! But our Western sense of sensibility couldn’t possibly allow for a probably suicide mission. That’s why it will be a Chinese astronaut; not only do they have the money to afford it, they don’t have the same public opinion constraints we do.

If Curiosity does anything, it will galvanise the Chinese into action I think, to push their space program forward. And on a personal note, if it doesn’t happen in my lifetime, I’ll by mightily upset! 😉