Do Power Lines Cause Cancer in Kids, e.g. Leukaemia? 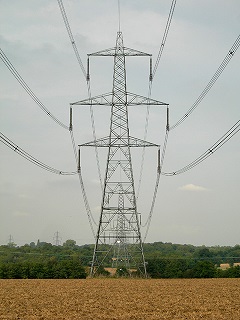 We’re moving house, and whilst writing it down like this sounds crazy, the estate we’ve picked is a few miles from a power station and has a set of main power lines and a few pylons running through it. (There are lots of plus points too, honest!)

Now everyone’s seen the “shock” headlines that power lines cause cancer right? I did someone tell me that? Or maybe I just thought they might? Anyway, I figured it was about the right time to properly investigate this and see whether it was true.

As a Chartered Electrical Engineer my first port of call was my governing body: the Institute of Engineers and Technicians (used to be the IEE) who have a working group to look at this exact issue (and that of mobile phones, tv and radio transmitters etc): the Biological Effects Policy Advisory Group. Here’s their latest policy statement, here is a fact file they’ve published on power lines and mobile phones, and here is a much more detailed fact sheet that looks at the whole issue: The Possible Harmful Biological Effects of Low-Level Electromagnetic Fields (EMF).

In summary the IET has been looking at this issue for 20 years and has been continually frustrated it seems in the fact that every time there’s a study that appears to show a link, it’s not able to be reproduced. I quote:

“… attempts have been made to replicate key studies, which have often been selected because of their apparently sound methodology, robustness and potential significance of findings… These attempts have been unable to confirm any of the original reports… the identification of even a single robust effect which could be used as a starting point to determine such factors as dose-response curves… has yet to be achieved.”

The issue is then that there are some studies that show links between power lines (what I’m interested in) and cancer rates, but that they are typically unreproducible, and as any scientist will tell you: if you can’t reproduce your findings, you haven’t found anything!

Actually I should be more clear, the studies that I’ve looked at don’t show a link between power lines and cancer, but specifically leukaemia, and then specifically only childhood leukaemia. That sounds bad right? Will maybe not as bad as you might think. Let’s look at one.

This study is published here in the British Medical Journal and is called: Childhood cancer in relation to distance from high voltage power lines in England and Wales: a case-control study. This is an epidemiological study which means they look at statistics and try to draw conclusions without any understanding of any science or mechanism behind it. You have to be very careful with epidemiological studies, as you constantly have to remind yourself that correlation and causation is not the same thing, and correlation does not mean causation. If you’re not convinced of that, ask me about pirates and their relationship with global warming some time. 😉

Anyway, back to the study. This UK study found that there was a 69% increase in leukaemia risk in kids who were born within 200m of power lines, and a 23% increase risk for those born between 200m and 600m. Those rates are relative to those that were born >600m away. What it didn’t find was any link with adult leukaemia rates. Nor did it find any increase in risk of other forms of cancer, including central nervous system (CNS) and brain tumours. If you’re so inclined, here’s some raw data that shows the distance of address at birth from nearest National Grid line for cases and controls in each diagnostic group, and estimated relative risk (RR):

The problem with statistics is you can draw all sorts of interesting interpretations from results. For example you could say that living within 200m of a power line actually decreased your chance of getting a brain tumour! But you’d never see that in a newspaper headline of course.

Either way, this doesn’t look great. A 69% increased risk of getting leukaemia if born within 200m of a power line. So adults are ok, and other forms of cancer have been discounted, but the problem with this headline grabbing figure is that it’s a relative percentage. Relative to what? 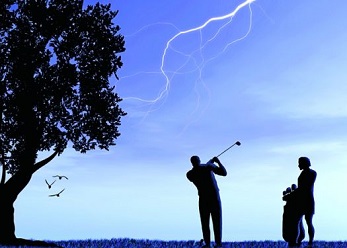 We all take relative risks every day. In the USA for example, 400 people out of 310M population get struck by lightning every year (1.29 per million). But not all 310M are likely to stand outside in a thunderstorm, unlike golfers. Now if we assume 1/4 were playing golf (I can’t find the exact stats) and there are 29M golfers in the USA so you could say (and you could cut the statistics many ways to get different figures, and I realise this is too simplistic but this is just an example to prove a point) that playing golf increases your risk of getting struck by lightning by 267%. But that doesn’t stop people playing golf, because getting hit by lightning is rare.

Just like you’re far more likely to crash and die if you ride a motorbike, but that doesn’t stop people doing it. Coming back to childhood leukaemia then, what does that 69% increased risk mean? Well there 2 figures that are really relevant:

5!  I was astounded when I saw that number.  All this research and worry and the risks we’re talking about is 5, out of 400 cases.  So power lines (assuming this study is accurate) cause just over a 1% increase in leukaemia rates in children.

Taking that further, the overall survival rate for childhood leukaemia is now 80%, which means that whilst very very sad, only 1 child dies each year from this.  Assuming as I say, we believe this study.  I say that because even Cancer Research UK say that there’s no proven correlation with power lines.

I will conclude then by saying that I have no concerns about living near power lines, what flimsy and inconsistent evidence there is for a link with childhood leukaemia represents such a small risk, it’s not worth bothering about.  One child dies every 3 days on the UK’s roads, a death rate  that is over 100x higher than that due to the possible and unproven increase in leukaemia deaths, but we don’t stop our kids going outside.  I’ll leave you with the conclusion from the IET working group:

“Given the uncertainties about whether there are health effects or not, it is understandable that people may wish to reduce their personal exposure “just in case”. The Institution agrees with this approach, although this should only be as a stopgap until research delivers firmer answers one way or the other. But in view of the weakness of the scientific evidence for harmful effects, the Institution considers it would not be justifiable to take any measures that had a significant impact on lifestyle, or that were costly, or that affected the undoubted and major benefits to society of a reliable electricity supply and of widespread mobile communications.”

Next post: How to Buy a House in 6 Weeks

Previous post: Why I Won’t Shop in PC World