This last month feels like a whirlwind as we’re in the auction cycle again and I’ve been hitting the auction listings heavily looking to buy before the end of the year.

The “possible deals” pipeline seems to have changed up a gear too as I’ve been approached with another 5 possible deals.

Having just got back from the Property Investor’s Awards night in London, (which wasn’t all play, I did some good business there) I’m a bit pushed for time, so this may be briefer than normal… lol, who am I kidding?!?

I did have a theory that the Nov/Dec auctions would be a good time to pick up a bargain as I suspected that many people would be too busy with planning for Christmas, and not wanting to start a project in winter. Sounds reasonable right?

However I wonder if our new public enemy #1 George Osbourne has put paid to that idea with his announcement of an additional 3% stamp duty on buy to lets (more on that below), as it’s going to create an artificial surge of interest before it comes in, in April 2016. Conversely April/May 2016 auctions will probably be dead!

So over the last month I’ve been pouring over auction lots, 569 to be precise, looking for that special something. Out of that lot (pun INtended, haha) there were only 4 that really caught my eye, I’ll let you know how it all went in the next update.

More Deals That Didn’t Happen (Yet)

In addition to my list of possibly deals last month, I’ve had several more pass my desk. Obviously I can’t go into much detail with these, as they’re all live deals that are yet to come off:

Another block of 10ish flats, in which we’re negotiating for 25% Below Market Value (BMV) from an independent RICS valuation.

A whole row of 10ish houses, again which we’re negotiating for 25% BMV from an independent RICS valuation. This one is much more tricky, as if we were to actually complete on the houses at 25% BMV, because “market value” is heavily dependant on what’s sold nearby, we’d have reset the market value down 25%!

What’s likely then is we’ll go for something like a Lease Option on these properties, and sell them on slowly at the full value, obviously pocketing the difference between the option price and the sales price.

Another block of 10ish flats being sold by a developer. Given the location these flats really do lend themselves for immediate resale, so the idea here is to do an Exchange with Delayed Completion on the whole block, split the titles (on behalf of the vendor), and sell off the flats individually. But we never actually complete, the end buyer slots into our contract and completes with the vendor, and we take the difference.

It’s a great question as to why would the developer would do this? Basically he needs some liquidity quick to do another deal and doesn’t want to wait the 3+ months it will take retail buyers to get their mortgage cash together and wait for their chains to complete, only to have typically 1/3 fall out of bed.

I’ve also been approached by a fellow investor who has done a great job sourcing a couple of simple house refurb deals at a good discount, he’s looking for a JV partner to supply the cash to purchase these deals as bridging finance is expensive and adds extra hoops to jump through that he doesn’t need. Besides it’s always more fun to work with people who have a similar mindset, than faceless financial institutions.

Finally I’ve come across a couple of properties that would be excellent large HMOs, but to be honest I’m struggling with the brain capacity to think about them whilst auctions are looming, so we’ll just see what happens to them in a few weeks I think.

You probably can’t have failed to hear that George Osbourne’s war on buy to let is being ramped up with the announcement that a 3% premium on stamp duty is going to be applied to all buy to let (and second home) purchases.

It’s not yet clear how this is going to be implemented, and there’s some rumours around that it won’t apply to properties below £40k (like that’s going to help much!), and won’t apply to corporate institutions that own more than 15 properties. However the HMRC press release that added detail to the Autumn Statement, didn’t mention either of these details, so we’ll just have to wait and see.

I used the phrase “war on buy to let” deliberately, as that’s what it is, or rather it’s a war on “small time” buy to let investors. George wants to protect his corporate mates from the hit.

I’ve also been told just this week some shocking news about mortgage interest relief which is being cut to the 20% basic rate… our man in number 11 wants to scrap it altogether! Basically the reduction to 20% is just the first step. :-/ I won’t reveal my source, but it’s one of those “friend of a friend” sources, maybe it’s true, maybe it’s not, read into that what you will.

I expect more and more people to be incorporating into Ltd companies moving forward. The banks will no doubt milk it for all its worth by charging a premium on corporate mortgage rates, but eventually as more lenders come into the market, competition will drive rates down to current levels I think.

It was a great night at the black tie (well mine wasn’t black) Property Investors’ Awards in London last weekend. I was particularly pleased that thanks to a decent diet (you’ve read my book right?), I was still able to fit into the tux I bought when I was 20 years old! One of these pictures was taken 20 years ago, one was taken last weekend, see if you can spot the difference! 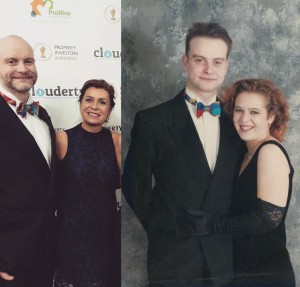 I have 2 properties that required refurbing, one which I’m renting and one which I’m flipping. It seemed like a good idea to me to do the renter first, as that would then be producing an income whilst we refurbed the other. For both the refurbs were light, just a tidy up really, and expected to take about 3 weeks each.

Well that was the plan. We’re currently into week 8 of the first 3 week refurb! Everything that we’ve touched has broken, snapped, disintegrated, wasn’t screwed on, or just fallen apart. Not only has this cost me in extra time for the builders, but also the loss of earnings because of the delays is hurting, so I’m currently in the hole for several £thousand more than I expected.

It’s annoying but these things happen, you just have to keep on swimming, until it comes good. So that’s what we’re doing.

My ever entertaining LHA HMO has been mostly quiet this month, thankfully. I’ve had 1 tenant leave, he’s the chap who nicked 2 months housing benefit and blew it. He still owes me £800 but to his credit, he’s offered to pay £5 per week and work the rest off as an when I have work for him to do. Time will tell if he’s to be believed.

I’ve got another tenant lined up to take his room, this chap has just come out of an 8 year stint in jail. It’s been suggested to me that such long term prison leavers do actually make good tenants, particularly older people (he’s nearly 50) as they often have realised that life is passing them by, and have resolved to behave. Again time will tell if that advice is sound or not.

That will do for this month, and in fact this year. Have a great Xmas and New Year, here’s to 2016!

Next post: January Property Update – A Box of Roses…?