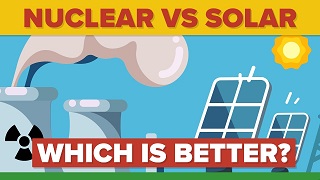 There have been gazillions of column inches written on this debate.  It’s heavily political and very emotive.

So why not listen to a self confessed hippy, christian, pacifist, anti-nuclear activist as he details what he now thinks about nuclear power, in a typically excellent Ted Talk.

Unless you’ve had a particular interest in the data before, his conclusions will surprise you and may just change the way you think:

So what do you reckon? What about that video surprised you? I bet like most you thought loads of people died from the Chernobyl and Fukushima accidents?

To discover there were zero radiation deaths, but 1,500 from the evacuation… that beggars belief!  In fact, do you know which energy source is the most deadly?  Go on, have a guess.  Is it: coal, gas, hydro, nuclear, solar or wind (we know by now it’s not nuclear).
Which one has killed more people than any other?

It’s hydro!  Surprised? Here’s why: dams have this nasty habit of occasionally breaking and sending a massive flood downstream that wipes out villages.

To date there have been 193,566 know fatalities due to dam accidents.  But where’s the public outcry?  Where’s the hydro-activist movement demanding dams are decommissioned and and end to hydro-electric power? There isn’t one.

Compare that to the number of verified number of nuclear deaths worldwide, which is just 204, this means hydro is approximately 1,000x more deadly than nuclear!

When you put away your preconceptions and scratch the surface to actually look at the data, the case for nuclear power is overwhelming. What’s more, despite it being the clear winner, I’ve been saying for years that nuclear power is being held back from it’s real, and promised, potential. When nuclear power was first introduced into the UK, the marketing strapline was:

“Power too cheap to meter.“

Well that clearly never happened, and here’s why: All nuclear waste is very carefully controlled, managed, processed, stored, monitored etc etc.  That sounds like a good idea through right?  Here’s the rub:

“Low Level Waste (LLW) comprises some 90% of the volume but only 1% of the radioactivity of all radioactive waste.” (source: the World Nuclear Association).

As you can see, nothing that anyone would reasonable consider radioactive.  In fact, it’s been said to me (I know several nuclear engineers) that if you took an old fashioned dial watch with luminous paint on the numbers and tossed it into a cubic meter of dirt, that would be classified as low level nuclear waster to be controlled, managed, processed, stored, monitored= £££££.

Did you know that coal power kills about 12,000 people per year?  How do you feel knowing that the electricity that boiled your kettle, that is lighting your room, or that is powering your device right now, came (probably) from coal power that someone died to bring you?  I’m sure you’d feel bad for a moment… then move on, because you don’t know anyone who died from coal power. But then, you probably don’t know anyone that died from nuclear either, right?

So what if we allowed nuclear to be as safe as coal, which most people seem to be pretty happy with? What if we slashed the safety cost of nuclear by 90%? It’s really hard to put a figure on this, as health and safety is baked into every step of the nuclear process. But speak to those who work in the industry and they’ll tell you a vast proportion of everything they do is around safety.

I think it’s very reasonable to assume we could probably cut the cost of nuclear power by at least two thirds, probably more. It’s very likely nuclear power would be cheap enough that we could afford to build a ring of nuclear power plants around Africa, each next to its own desalination plant (for making fresh water from sea water).

Not only could we end water shortages in Africa within a generation, but we could irrigate Africa and turn Africa into the garden of the world. What benefits would this bring us:

I could go on, but you get the gist. The fact is, nuclear power health and safety policy in the west is responsible for keeping Africa on its knees.

We could end the suffering of a billion people at the stroke of a pen, if only we can get over our completely irrational fear of nuclear accidents, which have been shown over and over again, to hardly kill anyone. But it won’t happen as long as there’s a vocal ideological anti-nuclear lobby (greenpeace eta), and political parties are afraid of losing votes in the next election if they’re too bold.

In summary, African poverty and suffering is a political policy decision that could be halted with today’s technology through the sensible use of nuclear power.

How many African children are going to die, today, because of our collective fear that a nuclear meltdown might… well, might what?  Chernobyl was the worst possible disaster a nuclear accident could possibly be, and it killed a couple of hundred people, the same number as die on our roads in a month!

Vastly more people died in the stampede to get away from Fukushima, than in the accident itself.  The fact is, nuclear is incredibly safe, even when it’s a disaster!  But children are dying today, right now, in the time it’s taken you to read this post.

Think about it, we can save them, if we have the political will to do so.

Next post: Should You Feed Bread To Ducks and Swans?