Should You Feed Bread To Ducks and Swans? 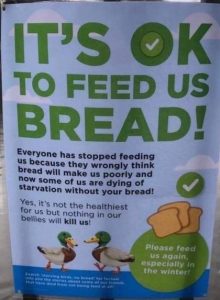 The country seems to have lost it’s shit over this photo of a poster that appeared on social media this week. Let’s look at the facts:

1) The “Ban the Bread” campaign was originally launched by WildThings, a company that, guess what, sells bird food.

2) Before the Ban the Bread campaign, I don’t recall ever hearing about an overweight duck or swan that had died of malnutrition after eating an excess of bread.

3) Bread of any kind is not a natural diet for ducks or swans.

4) Swans in particular (don’t know about ducks) are now dying of starvation, and some swans today are underweight.

5) The Queen’s own Swan Marker David Barker has weighed in, supporting the occasional feeding of bread to swans.

We have a culture of taking the kids to feed bread to the ducks and swans in this country, and that has likely created a situation where their population is greater than the natural food found in the waterways will support.

Now that people are reticent, it seems clear to me that the Ban the Bread campaign, whilst very well intentioned (and I’m sure not at all motivated by a hope for increased sales!) has caused real harm to the swans, and likely ducks too.

Yes in an ideal world, everyone would switch to more appropriate bird food, but realistically that’s not going to happen, and clearly isn’t happening. I myself had an unwanted 1/2 loaf of bread this very week… it went in the bin rather than go to the local swans. I think on only 3 occasions in my daughter’s 18 year upbringing did we ever go to “feed the ducks” with some left over bread, it was hardly a regular thing.

So either we continue to not feed bread, and suffer a population readjustment (read: mass deaths from starvation) until the population of ducks and swans reduces to a level nature can support, or we ditch the Ban the Bread idea, and go back to occasional bread feeding (proper feed preferred of course) and the joy that brings.