I was ecstatic last Wednesday at getting a 100kg Clean. It’s a land mark point and as Giles Greenwood said: “You never forget get your first 100!” Ok, I didn’t get the jerk, but I was just concentrating on the cleans. And I dropped it a couple of times first, but I got it.

Today I was back at Bethnal Green and I resolved to work on my Snatch technique. No complicated routine, no rush, I just had a simple plan: do a pair of Snatches every 5 mins. Starting at 50kg I wouldn’t move up in weight until I’d done 2 pairs with good form. So how did it go?

50kg was good. 55kg was ok. 60kg was not going well! At 60kg every lift was different, power snatches were popping up by accident as often as not, and I was dropping every third lift. Things were not looking good! Then the break through, in the form of 45 minutes of 1 on 1 from World Masters Champion lifter Patrick Atteridge: 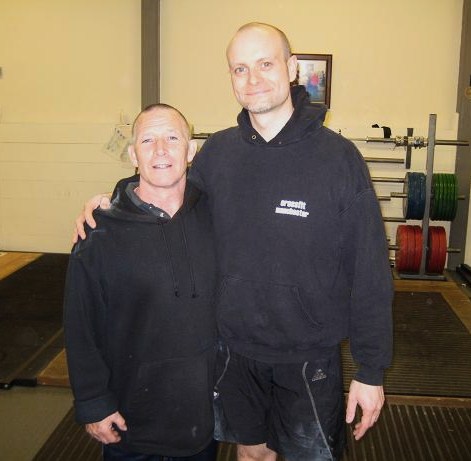 Pat Atteridge and me at Bethnal Green Weightlifting Club

The night was quiet towards the end and I was very lucky to get Pat’s undivided attention, there were several bits of advice that Pat gave me. First, and contrary to what I had been doing, was to relax my arms. I had been tensing everything that I could before the snatch, but Pat explained that you should only tense the muscles that are needed, and everything else should be relaxed. If you’re too tense, you can’t move fast and the snatch is all about speed. Doing this did seem to make a small improvement.

Second was to keep looking up (at about a 30 degree angle) fix a spot on the wall and stare at it. This keeps the chest up and helps prevents shoulders drooping at the catch. At first this decimated my snatch and I dropped 3 in a row, but after 20 minutes I was getting it and was doing better.

The third tip was a total focus on speed, realised by concentrating on catching the snatch in the lowest possible squat. Pat said: “Catching 3 inches lower will add 10kg to your max snatch.” It took me half a dozen goes to really get a deep landing and I was getting under it, but kept dropping the bar forward.

Finally Pat told me to really punch my arms and shoulders up and back at the bottom of catch.  That was the key ingredient.  It took a few goes to get everything coordinated, and I dropped at this point to singles, but 15 minutes later I was nailing a fast and deep landing. The snatch has never felt so easy!

The 60’s were shooting up, so I jumped to 65, which is an equal PB lift, and I got it comfortably first time. With only 10 minute left till the gym shut I quickly moved to a PB attempt at 67.5 Something went wrong in my head and the first attempt went no where. However the 2nd went up nicely and I nailed the landing. A new 67.5kg PB, woot! I had a couple of goes at 70 in the dying minutes but couldn’t quite get under it properly and lost my balance. Another 10 minutes and I reckon I’d have got that too. Well, that’s something to aim for next time.

Now if I can just get my jerk up to 95kg tomorrow, I’ll be well pleased…