Is This The Best, Bad News?

I’ve ummed and ahhed about posting this up, but this is my personal blog and somewhere along the line it feels right to use it to get my thoughts in order. Last Friday, I had some very bad news that brought home the fragility of life and made me question everything that I’m doing. To adequately explain it, it needs just a little background:

A couple of years ago, we noticed a lump on my daughters side. It was small, about the size of a pea. After having it checked out by a couple of doctors and getting an ultrasound scan at the hospital, it was diagnosed as a simple fatty lump or cyst and advised to leave it, as it would probably disappear on it’s own. 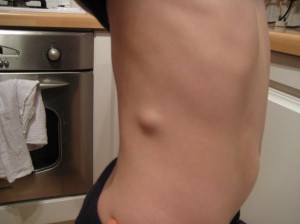 Fast forward to a few months ago and it had grown to the size of a grape and was caused our daughter some discomfort. She couldn’t sleep on that side and it was catching on things, e.g. her karate belt. So off to the Docs again and with his agreement, we were referred to the hospital for a surgical consult, where it was quickly agreed to remove it. Having my daughter go in for an operation was one of the most traumatic moments of my life, but thankfully, everything turned out fine. 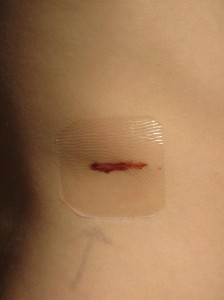 However, when we saw the consultant afterwards, he mentioned that he didn’t really know what the lump was and so had sent it off to the lab. I wasn’t too concerned. Some weeks later however, we got the results: they weren’t sure know what it was either, and it had been sent off to a second lab.

Friday we got the result: rather than the benign cyst we were expecting, they have identified Spindle Cells, which put it into the non-benign tumour category. Now whilst they have rated it as a low malignancy, low metastasis tumour, it’s hard not to use the big C word (though the consultant didn’t). If it’s not benign then it’s malignant, and a “malignant tumour” is the definition of cancer, and that is a word that is going to ruin your day every time.

If you don’t know, malignancy is how virulent it is in terms of it’s tendency to grow and invade neighbouring tissue. It grew from pea size to grape size in 2 years and the consultant said it was “like shelling a pea” in that it was completely self contained and showed no signs of spreading further. Metastasis means how likely it is to have bits break off and travel through the body to appear in other sites, which is usually what kills people.

So, the upshot of all this, is that they want to repeat the excision operation and cut out a bigger chunk of tissue. The purpose of this is to make sure they got it all and it will be rechecked for evidence of more spindle cells. This is happening in a couple of weeks. Having said this, the consultant really wasn’t too worried and said the risks were so low, if we didn’t want to go through with a repeat of the operation, he wouldn’t try to change our mind, as the likelihood was everything was sorted and this was the end of it.

So on the one hand, it’s certainly is pretty bad news. On the other hand, the lump has already been removed and has the lowest risk rating the hospital could give. Hence my title, is this the best, bad news? It’s a tough position to be in, as every operation carries a risk, and I wasn’t planning on repeating the trauma of the last one too soon, if ever! The kid of course is mostly oblivious to all this worry, which I’m trying hard to maintain, but the worst thing of all is the feeling of complete helplessness. It’s the curse of parenthood for sure.