As part of the warm up in our weekly Personal Defence Readiness™ (PDR) classes at CrossFit3D, we always do the 3 Step Bear Hug drill. For me, the 3 Step Bear Hug encompasses in a single drill many of the core elements of Tony Blauer’s S.P.E.A.R. SYSTEM™:

It’s a relatively simple drill, but one that allows the student to quickly experience the efficacy of the S.P.E.A.R. SYSTEM™ when done right, whilst maintaining a safe environment. Experiencing the power of superior use of physiology against a stronger opponent is often a light bulb moment for students, it certainly was for me when I first did this drill. In this post I’ll take you through the elements of the 3 Step Bear Hug drill and explain what’s going on and why it’s important.

To start, here’s a short video of myself (sporting my Movember moustache!) and one of our students (Paul) demoing the 3 Step Bear Hug. It’s shot twice, so you can see both sides:

As you can see this is a slow and deliberate choppy drill. Taking my points above in turn:

1) A Realistic Training Scenario
The scenario here is that I have to move someone who doesn’t want to go. An example is someone has overstayed their welcome at a party in your house and you are forced to physically eject them. At first they resist, then the second time you give them a tug, they jump you with a bear hug and push you back, from which you have to attain a point of dominance.

A key point is that this is not a lethal encounter, a friend has just got out of hand. Always the scenario will dictate the scale of your response in a conflict. It is disingenuous to teach “If he does that, you do this.” in every case, as the particular circumstances of a fight will determine your reactions. You will react differently fighting with your sister, than you will when facing a potential rapist! 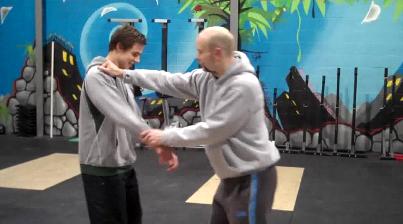 You can see in the video I approach Paul and grab his right shoulder with my right arm (protecting my face in case he swings for me with his left hand) and his left wrist with my left hand. I tug and he resists. I tug again and the trap is sprung as Paul leaps forward and grabs me in a bear hug. 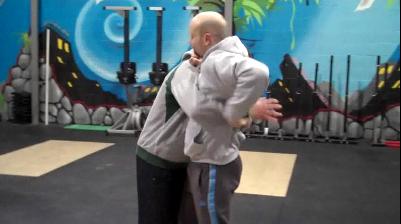 In a realistic encounter, this would happen faster than I could consciously react. In the drill we do it slowly, at about a speed of 3 out of 10 say. In reality, surprised by a close quarter stimulus, I would flinch bringing my right arm up to protect my head, thereby probably getting my right arm trapped against my body. It’s likely that the Cross Extensor Reflex would mean that I grab on tight to the bad guy’s wrist, which I’m already holding. These aspects are replicated in the drill in order to provide realistic integrity.

3) Starting From A Sucky Position

Continuing the realistic scenario, having taken me by surprise Paul pushes my backwards, for the purposes of the drill Paul pushes me back 3 steps. A nuance here is that I’m not walking backwards, Paul is pushing me. This replicates what would actually happen; I am not in control of the fight here. 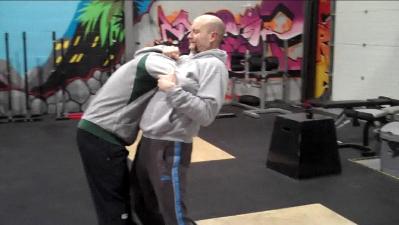 After the 3 steps, I’m in a completely compromised position: my feet are together in a non-athletic stance; my axis (my back) is angled backwards; I’m virtually off balance and am at risk of being dumped an my butt (Paul’s job as a Good Bad Guy in the drill, is to look after my safety and make sure I don’t get dumped backwards). This is my starting point and a key point to PDR training: there’s no “stance” here, I’m not physically prepared to fight, but this is the sucky position I must get myself out of in order to take charge of the fight.

The 3 Step Bear Hug drill is not only slow, but intentionally choppy. At each point of transition, I deliberately take a second to think about my positioning and what happens next and in which order. You can see this in the video. Starting from my sucky position, with the knowledge of how to leverage my physiology to my advantage, I begin to convert my flinch response into something useful. 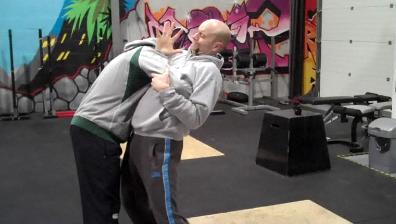 The first step is to let go and splay my fingers. This engages the stronger and more efficient extensor muscles in my arm. Note that this happens in isolation, nothing else moves except my fingers.

I got slightly ahead of myself with my left hand, but it’s in the right place now. I’m lightly indexing Paul’s triceps with my left hand. Not only does this give me more control over positioning him, but it also brings into play one of the 3 sense with which we detect a stimulus: the tactile sense. (The other 2 being: visual and auditory.) If Paul’s right hand were to reach for a knife or otherwise recoil to punch me, I’d feel it before I saw it, which would give me a moment’s notice to react. 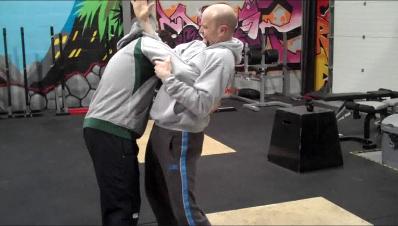 Step 2 is to get my elbow to an angle that is more than 90 degrees, or “outside 90”. Again this is done in isolation. Until my arm is outside 90, I apply no forward pressure on Paul. The reason is that until I have splayed fingers and an outside 90 elbow, there is no point pushing into him as I will simply collapse the structure of my own arm first and we’ll end up in a Sumo style shoving match. That is not what I want (partly because I know he’d kick my butt at that with ease!) but more because I want to attain a point of physiological advantage first. 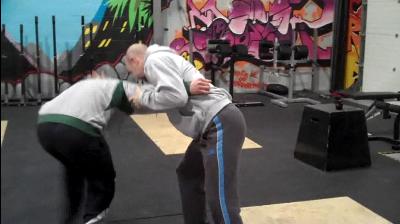 Step 3 is a compound movement in which I first twist my hips towards the threat and then stomach crunch into the bad guy, angling my back forwards. It can be instructional to do these 2 moves in reverse, i.e. push into the bad guy first, then twist the hips in. If the hips aren’t pointing towards the threat, any initial push is ineffective, only when the hips are twisted in then the power comes on like a switch. It’s a good teaching point to demonstrate the power of the hip movement before the drive into the bad guy and a common fault to spot in students who are struggling at this point.

The point of all this is to use our physiologically strong arm (splayed fingers, outside 90) to attach like an unbendable bar to our body, which allows us to bring to bear our strong leg and stomach muscles. All the force at our disposal from our big muscle groups are brought to focus on the side of the bad guy’s neck. As a long time Crossfitter and semi-pro rugby player, Paul is a super strong guy. Being a Good Bad Guy, he’s under instructions not to let go of me unless I do something to make him, but he folds like a paper hat as I move to my point of domination.

Step 4 puts my feet into a stable and ready for action sprinter stance. Here I have a balanced and stable platform form which to act or react as necessary.

5) Getting Control of the Fight 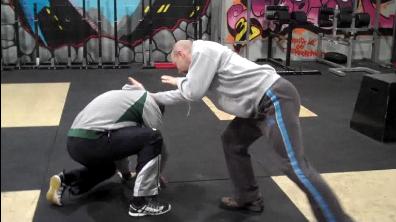 Up until now, Paul as the bad guy has controlled the fight. He decided when and how it started and what happened in it. I’ve been reactionary only. Now however, I’ve gained control and now I decide what happens next. The SPEAR System is sometimes described as “A bridge to your next move” and so it is here. Back to my point earlier: the scenario dictates what you do. 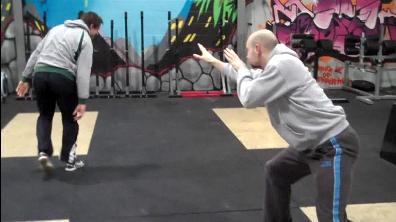 A key point for every drill here is that until the bad guy has retreated out of dangerous range, I maintain my Close Quarter Combat Stance. My fingers are splayed and I am looking through my thumbs at the threat (the “Rule of Thumb”). My lead elbow is outside 90. My trailing hand is protecting my face. My axis is forward. I’m in my sprinter stance and ready for action. I move and react to the positioning of the threat as Paul moves.

The reason for this is we practice what is required in a real scenario. If you practice relaxing and resetting as soon as the bad guy is controlled but still within striking range, that’s what you’ll do out on the street. So we practice staying on our guard until the bad guy is safely away.

Everything we do when teaching PDR classes has thought to what would happen in real life, being mindful of how we behave and how we’re wired genetically as people. The S.P.E.A.R. SYSTEM™ is Genetically wired and behaviourally inspired™. In this way, the system stays honest to its reality based routes and we make sure we’re not teaching cool moves for the sake of looking cool!

If there’s one drill that can be taught to a completely novice student, and within just 1 hour have that student leave the class a more competent, confident and safer person, it’s the 3 Step Bear Hug drill. And that’s why it’s my favourite drill!