What To Do in South Africa for 3 Weeks

I’ve not posted anything on this blog for a while, the reason is that I’ve just got back from a 3 week holiday in sunny South Africa, and a jolly good time it was too.

The primary reason for not posting about my holiday before now, is that has never struck me as particularly sensible to announce on this great interwebs that you’re going to be away from home. Of course we had someone looking after the house, but all the same.

In a nut shell, here are the highlights:

Flights and the A380 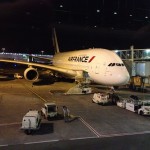 Would you believe that it’s no longer and significantly cheaper to fly from Manchester to Jo’burg via Paris with Air France, than to fly direct from Heathrow. When I say cheaper, it’s £240 cheaper per ticket!

An unexpected plus was that Air France fly the new double decker A380 from Paris to Jo’burg. It’s a very impressive plane and no mistake. I particularly liked the webcam feed from the tail during take off and landing, and that there were nearly 100 films served up by Video On Demand to your personal screen. 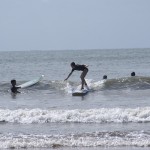 I’ve never tried surfing before but where best to try than in the permanently warm waters of the Indian ocean? A hour’s lesson was never going to be enough, but me and the nipper both managed to get up… if only briefly! 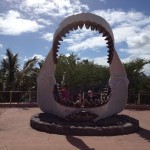 Not quite as adventurous as it sounds, the shark diving experience at uShaka Marine World in Durban was exciting nonetheless, and very cold. Me and the nipper were put in a shark cage and roped into the centre of the pool, from where we could dive under water and see the several sharks that shared the pool.

There’s loads to do at uShaka including some awesome water slides and live entertainment and snorkelling and aquariums etc. 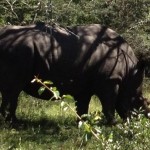 Driving through a game reserve would always be an exciting an rewarding experience, but when you have a trained and very experienced game ranger (my very talented cousin) in the car with you, rewarding becomes exceptional, not just for knowing where to go and what to look for, but also for the background information.

Did you know for example that when spooked, all animals will run into the wind? So knowing which way the wind is blowing at all times, is rather important when walking out in a game trail. 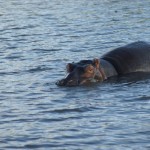 Possibly a rather touristy move, but taking a guided tour boat ride on the 70km St Lucius lake was a very nice way to see mostly hippos and some crocodiles in their natural environment.

Most concerning though was the news the following day that there had been a fatal crocodile attack on the very stretch of lake we’d been on! It turns out that the crazy woman had been fishing in croc territory and had waded into the water to retrieve her caught fishing line. A croc grabbed her arm and pulled her under, drowning her. Unbelievable stupidity. 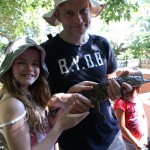 Another unexpected benefit of having a ranger as a cousin is that you get personal tours of the local crocodile centre by the owner and his family. Which included the opportunity to handle one of the baby crocs. Much like snakes are not slimy as people think, crocs are much softer than they appear, especially their underside and surprisingly under their feet, which is incredibly soft and supple. It was very cool to get to hold one. 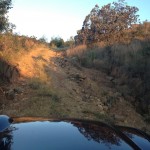 My cousin runs an educational facility in the Drakensburg mountains and on the first day staying with him, him tossed me the keys to one of his 4×4 “baccies” and said I should take the family on a drive up into the mountains, on our own no less. Driving a kind of car I’d never driven before, on a road surface I’d never driven on before (using the word “road” here is being rather generous), up a mountain I’d never been on before, without help or guidance, with an hour till nightfall… what could possibly go wrong?!? 😉

As it turns out it was fine. Better than fine actually, it was a whole lot of fun and I grinned all the way up and down. It also gave me an insight into my cousin’s mindset as an educator. Whilst the perceived risk as I outlined above may have been high, the reality is that the actual risk was considerably lower; it allowed my family and I get the feeling of independent adventure, in a relatively managed and controlled way. A clever guy that cousin of mine. 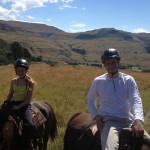 Horses (otherwise known as super strong masses of muscles that kick and bite) scare me. Well they did, they don’t any more.

I’m struggling to know where to start to describe the experience of riding horses that are generally free to roam a 30km x 170km fenceless stretch of the Drakensburg mountains, but choose to come home every night! The whole Natural Horsemanship (or Horse Gentling if you prefer) approach to training horses is in stark contrast to the traditional methods used to “break” a horse.

To put this into context, my 11 year old daughter who is virtually a total novice rider, rode a horse that had been declared “unrideable” by experienced riders after going through traditional training, and was going to be shot before my cousin rescued it and rehabilitated it using natural horsemanship techniques (he doesn’t like the term “horse whispering” as it mystifies something that isn’t a mystery).

Riding Western rather than English style, makes a lot more sense in the mountains too, if for no other reason than the saddles are a lot more comfortable. The whole experience of riding amazing horses, where it would be impossible to go in a vehicle (even with my new found 4×4 skillz!), in beautiful mountain scenery, was breath taking.

Shooting in the woods 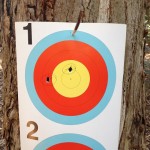 Ok this was only with a 9mm semi-automatic Czech made pistol at targets stuck to trees, but coming from England, where all handguns, pistols and any rifle with calibre greater than .22 are completely banned, this was a rare opportunity.

I’ve only ever shot a proper gun once before, when I was a teenager, and was told I was pretty good for a first timer; I’m happy to report that I don’t appear to have lost my touch. This was 2 shots into a target 14m away for example. 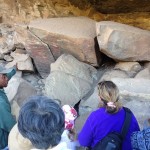 Giant’s Castle is one of the Drakensberg Peaks where native South African Bushmen (or the San people) used to live, stretching back thousands of years. Apart from archaeological finds, the obvious evidence is in the hundreds of rock paintings depicting their lives and mythology, and places where smoke has stain the rock roofs for example.

It’s pretty humbling to drive some distance into the mountains, far from anything you could call civilisation, hike for over a mile into the peaks, and discover ancient rock art and places where people lived long before the Western world ever found them, and see their thoughts and experiences depicted in art drawn on rocks. 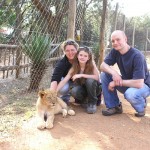 We also drove through the lion enclosures, which was pretty cool. Check out the surprise at 0:55: 😉

The Apartheid Museum in Johannesburg 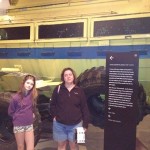 How can you go to South Africa and not learn about Apartheid? Alarming, humbling and upsetting, the history of apartheid and Nelson Mandela engenders a broad spectrum of emotions and an insight into one of the most recent examples of the shame of mankind.

The Cradle of Humankind 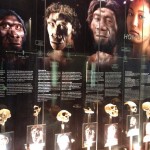 The area to the North West of Johannesburg has produced about a third of the world’s hominid fossil finds, including Mrs Ples, who has been called the fabled Missing Link. She (or possibly He, if the male skeleton found nearby belongs to the skull) lived 2 million years ago is the most complete skull from Australopithecus Africanus ever found, which is believed to be the common ancestor of all humankind.

In the same Sterkfontein caves, Little Foot was also found only 15 years ago. Contrary to the name, this find is unique as it’s the only complete Australopithecus Africanus skeleton ever found. Little Foot refers to the fact they found a few bones from the foot first, and have had to chisel the rest of the skeleton out of solid rock. In fact this process is still ongoing as there’s about 5% of Little Foot’s skeleton left to retrieve.

Maropeng Museum is the place to go that brings the whole experience together. A practical hands on museum, it’s interesting, educational and great fun to visit. It’s by far the best presented facility of any we visited in South Africa. If I had to go back and could only do 1 thing, this is where I’d go.

The Wonder Cave at Kromdraai 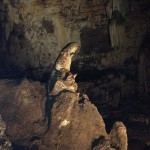 Other than the archaeology, the above Sterkfontein caves are a fine example of how man can obliterate areas of natural beauty, as all the mineral formations have long been mined for their limestone and little remains to look at.

The Wonder Cave in the nearby Lion and Rhino reserve however is another matter entirely. At an estimated 2.2 billion years old(!) it’s full of amazing stalactites, stalagmites and columns, having only been partially mined 100+ years ago, before being abandoned and lost until the new land owner decided to walk his property tossing a rock onto every hole he found. Well worth a visit.

There were many other things we did, but those were the main highlights and points I’d recommend. Altogether a fine way to spend 3 weeks, and that’s not to mention the quality family time we got, including extended family too. The last time we went to South Africa was 12 years ago and I sincerely hope it’s not another 12 years before we get out again.

Having said all that, it’s always nice to get home and sleep in your own bed. 🙂

Next post: Is the Gov’t Taxing the Rich Less?

Previous post: Should You Participate in the CrossFit Open Games?