Is the Gov’t Taxing the Rich Less? 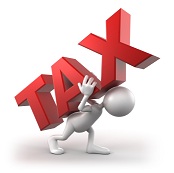 Something has been niggling in the back of my mind: a Labour party flyer that came through the door last week in the run up to the local elections which said “The Conservatives are giving tax breaks to the Rich” (or something like that).

So it occurred to me, that there should be a graph out there that, when all PAYE and National Insurance and Personal Allowances etc are added together, shows the total tax people pay by salary, and how that has changed from last year. I’m please to report that the internet did not let me down, and I found exactly that analysis already done here: 2012 – 2013 UK tax graphs for income tax and NI.

You can go and have a look at all the cool salary comparison graphs (*cough* if you’re sad like me *cough*) but the key one for me is this one, which shows the change in tax rate for last year: 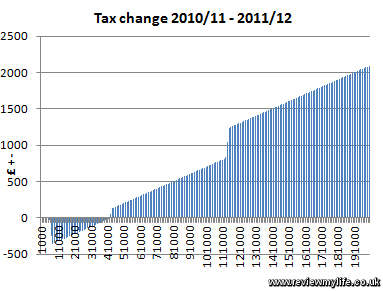 That doesn’t look like tax breaks for the rich to me! Every earning below 40K paid less tax, and everyone above paid more, with a bump at £115K. Even this year’s changes, which are smaller compared to last years, have the rich paying more and the poor paying less. I think that old phrase should be restated:

There are Lies, Damn Lies and Politics.

Previous post: What To Do in South Africa for 3 Weeks