Well today is competition day. In a couple of hours I’ll be off to Mytholmroyd to compete, and I’m pleased to report, I’m 1.1kg (just over 2 lbs) under the 77kg weight category, so I’m 75.9kg or 167.6 lbs (if that’s not mixing my units!). My wizzy new electronic zappy scales at home, say that this puts me at 13% body fat. This is my fitday weight loss graph (click it to make it bigger): 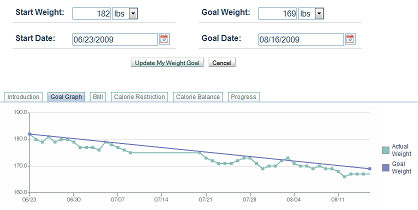 A couple of things to point out:

1) The flat line in the middle was a week’s holiday where I didn’t have access to any scales.
2) I’ve done a pretty good job of keeping below the target line, which has been encouraging throughout.
3) The regular peaks you see, are all at weekends. It’s been my major battle to keep those peaks low.

Not being complacent though, I am skipping breakfast this morning. I have no idea if my scales are aligned with the one’s they’ll be using at the comp today, so having that 1kg margin for error is very gratifying. Enough so that I’ve had a cup of coffee already this morning and I’ll probably drink 1/2 pint of milk when I feel I’m really hungry, just to tide me over till weigh in at 10am, then I can eat.

I’ve lost 15lbs (1stone1 or 7kg) in about 8 weeks, which is a healthy 2lbs per week weightloss rate. Clearly this has not been a rapid or fad weight loss. I achieved this by actually changing nothing in my diet. I continued to follow the Zone Diet Plan as prescribed, the details of which are:

So if I was eating the same as before, how did I lose the weight? Simply, I stopped cheating. I stopped drinking wine and eating chocolate or sweets. I also was went back to weighing and measuring to make sure I was being accurate with my blocks, and sure enough, as time had passed, it appears that my determination of what an ounce of cheese looked like, had morphed into something closer to 2oz, for example. In summary, I was just a lot stricter about my zone diet.

This weight loss has had 2 additional consequences I wasn’t anticipating:

1) The new 34″ jeans I bought just 2 months ago, now no longer fit and yesterday, for the first time since I was a teenager, I had to buy 32″ jeans!
2) I appear to have a 6 pack, just. Modesty dictates that I won’t be uploading a picture any time soon, but to say that I’m pleased to be getting my first 6 pack at 36 years old, would be an understatement. The way I see it, Crossfit created it, and the Zone revealed it.

I’d like to say that that’s the hard work finished. But now I have to go to Mytholmroyd and actually lift some weights! I intend on opening with a 70kg Snatch and 90kg Clean and Jerk, meaning I just need to find an extra 5kg from one of the 2 lifts, in order to make the 165kg total I need to qualify for the British Masters tournament in March 2010.

Hopefully I’ll have some pictures / video to upload later in the week.